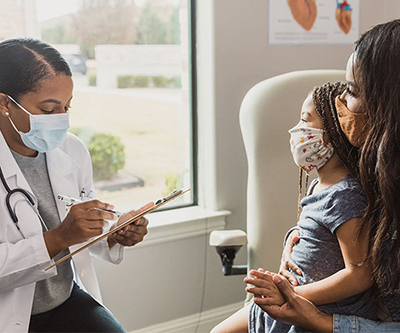 NICHD has a long history of supporting health disparities research—initially in the context of women’s health and intellectual, developmental, or physical disabilities—but also in timely circumstances such as the COVID-19 pandemic.

NICHD-supported researchers reported that distributing COVID-19 vaccinations by age alone, as many states did at the beginning of 2021, was not equitable. Instead, the researchers’ models suggest that distributing COVID-19 vaccines by geography and prioritizing harder hit neighborhoods, regardless of age, would have been more equitable and effective. The study team found that age-based distributions benefitted older White populations at the expense of younger minority populations, such as Black and indigenous groups. These findings will help policy makers in areas where COVID-19 vaccines continue to be scarce.

The institute continued its overall support of research on health disparities in pregnancy and maternal health. NICHD-funded researchers found that racial and ethnic disparities in maternal mortality—deaths related to pregnancy or childbirth—in the United States may be larger than previously reported. The analysis also revealed that these disparities were concentrated among a few causes of death, such as postpartum cardiomyopathy (disease of the heart muscle) and the blood pressure disorders preeclampsia and eclampsia. Another group of NICHD-supported researchers found that homicide is the leading cause of death during pregnancy and the postpartum period in the United States. They reported that homicide exceeded all the other leading causes of maternal mortality by more than two-fold. They also found that Black women and younger women had an even higher risk of homicide.

Researchers supported by NICHD also found that eviction during pregnancy was linked to poor birth outcomes, such as preterm births or newborns with low birth weight. The study team noted that these outcomes may have generational consequences because low birth weight and preterm infants are at higher risk for future health problems, such as diabetes and cardiovascular disease. The authors suggest that housing assistance for pregnant women can improve maternal and infant health. Another NICHD-funded team found that Medicare expansion was linked to improvements in pre-pregnancy mental health. The work suggests that expanding health insurance coverage to low-income people before pregnancy is beneficial.

NICHD research also helps pregnant women and families around the globe. Worldwide, preterm birth is the leading cause of death among children under five years old, according to the World Health Organization. Researchers in NICHD’s Global Network for Women’s and Children’s Health Research conducted an analysis that confirmed the safety of daily low-dose aspirin to prevent preterm birth. The study evaluated the low-cost drug in first-time mothers in low- and middle-income countries.

Improving the health of all children is also a priority for NICHD. Researchers in NICHD’s Pediatric Trials Network conducted an internal evaluation of the racial and ethnic representation of all of the pediatric drug studies supported by the Best Pharmaceuticals for Children Act (BPCA), a legislative mandate carried out in part by NICHD-led research. The study found no evidence of racial and ethnic bias in enrollment for BPCA studies, fulfilling the institute’s expectation to ensure adequate representation of all children.

Overall, scientific advances such as these continue to advance health equity for all.