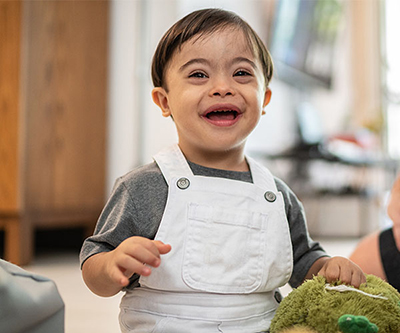 Improving the health of people with intellectual and developmental disabilities (IDDs) has been central to NICHD’s mission since it was established in 1962. The institute continues to lead research on IDDs nearly six decades later.

One team of NICHD-supported researchers developed a prototype app for mobile devices that can screen children at risk for autism spectrum disorder (ASD). In the study, the app could distinguish toddlers diagnosed with ASD from typically developing toddlers by tracking their eye movements while watching videos. With more research, the app could one day screen infants and toddlers and refer them for early intervention, when chances for treatment success are greatest.

NICHD-funded researchers also reported that regular doses of the hormone oxytocin do not appear to help children with ASD. The findings contradict smaller studies that indicated the hormone could alleviate the difficulties in social functioning that are characteristic of the disorder. With this larger study, healthcare providers now have more information on appropriate therapies.

NICHD-supported researchers also combined data from multiple studies to describe early patterns of developmental delays in infants and toddlers with an FMR1 mutation, which causes Fragile X Syndrome (FXS). The study team reported that boys with FXS had delays in early learning, motor skills, and language development as young as 6 months of age, while both boys and girls with FXS had delays on all developmental domains by their second birthday. These findings highlight the importance of early identification, when interventions have the greatest potential to improve developmental outcomes.

People with IDDs have a higher risk for excess weight or obesity. NICHD supported a clinical study to evaluate weight loss interventions and methods for delivering them (i.e., face-to-face or remotely) for adolescents with IDDs and excess weight or obesity. The study evaluated a modified version of the stop light diet, which categorizes foods by energy content: green (low energy, consume freely), yellow (moderate energy, consume in moderation), and red (high energy, consume sparingly). The team found that their enhanced stop light diet, when delivered remotely, can effectively help adolescents lose weight. Such findings are especially important in light of the COVID-19 pandemic and rise in telehealth services.

NICHD-funded researchers also continue to evaluate outcomes from the Management of Myelomeningocele Study (MOMS), which compared surgical treatments for infants with spina bifida, a birth defect that occurs when the spinal column fails to close around the spinal cord. The researchers had found that surgery during pregnancy, called prenatal repair, provided better outcomes through age 2.5 years. In the latest report, the study team found that these outcomes, such as improved mobility, continued to persist among the prenatal repair group as the children enter their school-age years. These positive findings underscore the benefit of prenatal repair surgery.

Overall, NICHD-supported research has led to better diagnosis, treatment, and outcomes for people with IDDs.