Establishment of the NICHD 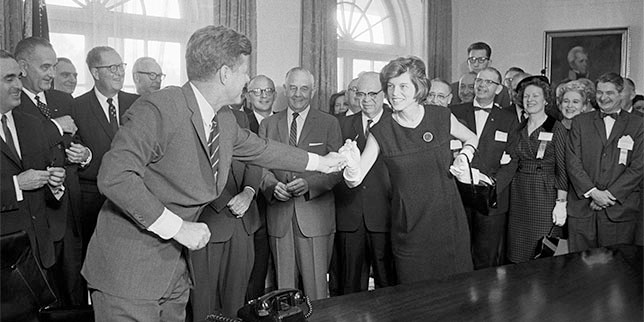 NICHD was established during an exciting time for science. In 1955, Joe Hin Tjio, Ph.D., discovered that humans had a total of 46 chromosomes. Prior to this finding, humans were thought to have 48 chromosomes, but the exact number was unknown. Dr. Tjio's discovery paved the way for research on abnormalities of chromosomes, a significant contribution to what would now be considered genetic studies.

Around this time, President Kennedy's sister, Eunice Kennedy Shriver, began her life-long role as an advocate for people with intellectual and developmental disabilities (IDDs). With the help of her husband, Sargent, Mrs. Shriver took on the challenge of improving the lives of people with IDDs and pursued that goal as a senior advisor to her brother.

A research field that focused on IDDs was virtually non-existent at the time. Some leaders in the scientific community felt that money spent to research topics related to IDDs would be better spent supporting research in more productive fields of health. Mrs. Shriver set out to help the scientific community, policy makers, and the public recognize the importance of such research, not just for those with IDDs, but as a bridge to understanding broader aspects of human development that would help all people.

Mrs. Shriver advocated for change not only in the views of the scientific community, but also in the way the world viewed people with developmental disabilities. Her vision and voice were represented in much of the health-related legislation that passed during the early years of President Kennedy's administration. The Kennedy family's personal concerns and commitment to IDDs spurred Robert E. Cooke, M.D., the family's pediatrician and senior medical advisor to the President, to advocate for research on the health characteristics and needs of people affected by these disorders.

In 1961, Dr. Cooke chaired a task force on the health and well-being of children. The task force's report, submitted to President Kennedy, pointed out that research on the physical, intellectual, and emotional growth of children was sorely lacking.

The task force members called for the founding of a "centralized unit," whose sole purpose was to launch concentrated research on disorders of human development, including IDDs. The plan included three parts: the development of university-affiliated facilities to train people to help care for those with IDDs, the construction of 12 IDD research centers on university campuses to provide facilities and a focus for research, and the establishment of a new institute within the NIH to conduct and support research on human development and developmental disabilities.

With the impetus from the task force report, Congress established a new NIH institute, the National Institute of Child Health and Human Development (NICHD), in 1962. With presidential and congressional support, NICHD became a funding source for research on birth defects and IDDs, created a new pediatrics specialty, and established IDDs as a recognized field of research. The formation of NICHD also gave credence to the idea that adult characteristics, such as overall health and behavior, had their origins during the formative years of life. With this concept among its founding principles, NICHD became the first NIH institute to focus on the entire life process, rather than a specific disease or illness.

NICHD's early years were both exciting and challenging. At that time, it was difficult to find researchers, physicians, and educators willing to enter this new field of study. But, with the support of Congress, NICHD recruited a cadre of some of the most accomplished researchers in the country. These researchers became directors of the 12 new IDD research centers, one of the three primary components of the task force plan.

In addition, NICHD staff saw a need for research focusing on the behavioral and social science aspects of human development. They felt that, through the combined efforts of biomedical, biobehavioral, and social science research, NICHD could provide a better understanding of human development and a greater opportunity for finding prevention and treatment methods. This framework was new to the scientific community, including NIH. The founding of NICHD represented the first time an NIH component would focus on biobehavioral and social science, as well as on biomedical research. But, it was this new focus on combined efforts that helped to build the foundation for later advances in human development research, especially in the developing field of IDDs.

On December 21, 2007, by act of Congress (Public Law 110-54), NICHD was renamed the Eunice Kennedy Shriver National Institute of Child Health and Human Development in honor of Mrs. Shriver's vision and dedication and for her contributions to the founding of the institute.