BPCA exists to improve the safety and efficacy of drug use and dosage for children.

BPCA became law in 2002. It was reauthorized in 2007 under the U.S. Food and Drug Administration (FDA) Amendments Act, in 2012 under the FDA Safety and Innovation Act, and again in 2017 under the FDA Reauthorization Act. The latest renewal of the BPCA legislation occurred in 2022.

The overarching goals of BPCA are to:

NIH Mandate (409I) authorized NIH to: 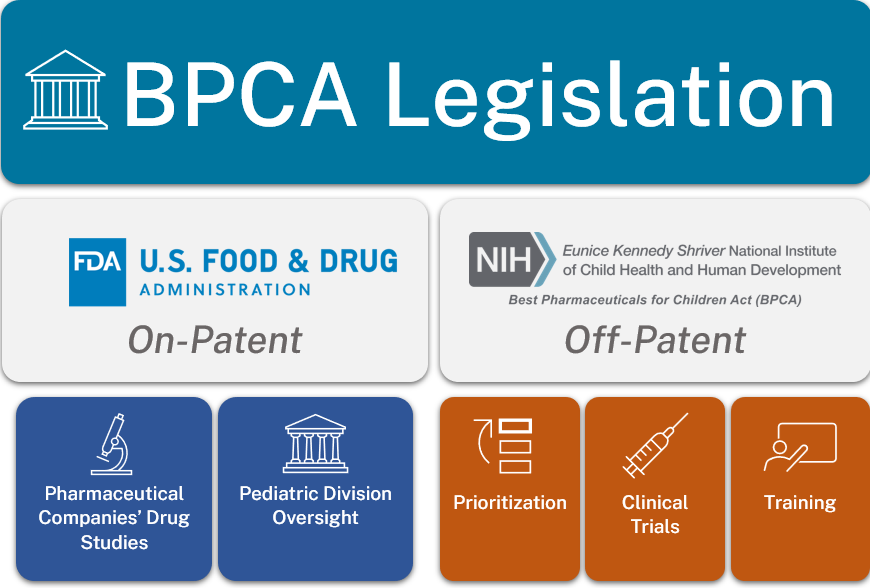 Far more drugs have been approved for clinical use in children since the passing of legislations such as BPCA and the Pediatric Research Equity Act. However, despite knowledge gains, there is still a notable degree of off-label drug use for children who need treatment for various medical conditions. Use of drugs outside of the prescribed label indications is considered “off-label” use, which can lead to inadequate understanding of appropriate dose, safety, or efficacy. BPCA's role is to identify and address these knowledge gaps.

NIH implements the BPCA mandate by conducting the following activities:

Congress appropriates approximately $25 million from the NIH budget each fiscal year for the operation of the BPCA program. NICHD contributes approximately 25% of BPCA funding from its annual budget. The remaining funds are drawn from more than 20 other NIH institutes with significant pediatric research portfolios.

BPCA Study to Evaluate Drugs Prescribed to Children with COVID-19