Menstruation (pronounced men-stroo-EY-shuhn) is normal discharge of blood and tissue from the uterine lining through the vagina (see diagram) that occurs as part of a woman's monthly menstrual cycle. Menstruation occurs between menarche (pronounced muh-NAHR-kee), a girl's first period, and menopause, when menstrual cycles end.1 The average menstruation time in normally menstruating women is about 5 days.2 In the United States, most girls start menstruating shortly after 12 years of age.3 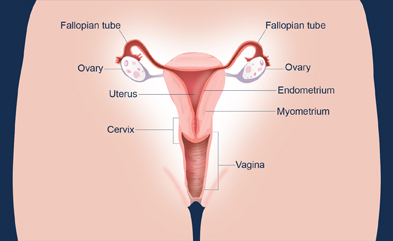 The first day of bleeding is considered the first day of the menstrual cycle. After bleeding ends, usually around day 5, levels of the hormone estrogen begin to rise. The rise in estrogen causes the lining of the uterus to thicken as it prepares to hold a fertilized egg. At the same time, the changes in hormone levels cause follicles (the sacs in the ovary that contain eggs) to grow and mature, in preparation for one follicle to go through ovulation.

Around day 12 to 14 in an average 28-day cycle, the egg is released from a follicle on the ovary in a process called ovulation (pronounced ov-yu-LAY-shuhn). Ovulation can occur anywhere between 10 and 21 days after the first day of a woman's menstrual cycle. A woman can tell when she has begun ovulating using several methods, including at-home tests that measure levels of luteinizing hormone (LH) in the urine and keeping track of her body temperature, which typically rises slightly at ovulation. At mid-cycle, some women experience pain on one side of their pelvic area; this pain is called "Mittelschmerz"4 (meaning "middle pain," because it occurs in the middle of the cycle) and may be a signal of ovulation.

If a pregnancy does not occur, decreasing hormone levels signal for the lining of the uterus, called the endometrium, to be shed during menstruation. 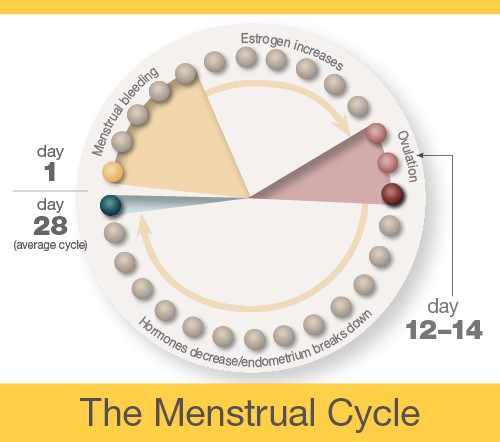 The embryo must successfully implant into the thickened wall of the uterus for the pregnancy to occur. The embryo first attaches to the wall of the uterus around 5 or 6 days after ovulation. It becomes more firmly implanted between 6 and 12 days after ovulation. Implantation causes a release of hCG—a hormone that signals the body to change to support the pregnancy. This hormone is what a pregnancy test detects.