​​​NICHD issues News Releases and Media Advisories to the news media. Spotlight and Research Feature articles explain NICHD research findings and public health issues to the general public. An Item of Interest is a short announcement of relevant information, such as a notable staff change.

Read about NICHD’s research findings and activities from 2022.

A large international study has confirmed the findings of a previous U.S. study that linked COVID-19 vaccination with an average increase in menstrual cycle length of less than one day. The increase was not associated with any change in the number of days of menses (days of bleeding). Funded by the National Institutes of Health, the new study included data from nearly 20,000 people from Canada, the United Kingdom, the United States, Europe and other parts of the world who received any of nine different vaccines. For most study participants, the increase resolved in the cycle following vaccination.

Read about NICHD’s research findings and activities from 2021.

Women receiving one dose of a COVID-19 vaccine during a single menstrual cycle had an increase in cycle length of nearly one day, according to an NIH-funded study.

Read about NICHD’s research findings and activities from 2020.

NICHD has supported gynecologic and reproductive health research for decades. Learn more about its leading role in menstruation research.

Carriers of the FMR1 premutation—a mutation in the gene associated with the developmental disorder Fragile X syndrome—may have a higher risk for several health conditions, according to an analysis funded by the National Institutes of Health.

As 2018 winds down, a new slideshow highlights a selection of initiatives, therapies, and scientific advances supported by NIH’s Eunice Kennedy Shriver National Institute of Child Health and Human Development (NICHD).

In 2018, researchers funded by NICHD made significant progress in advancing the health and well-being of infants, children, teenagers, and adults across the United States and around the world.

Podcast: Menstruation as a Diagnostic Tool for Women’s Health

Dr. Candace Tingen with NICHD’s Gynecological Health and Disease Branch speaks about the possibilities of tapping a woman’s menstrual cycle for signs of disease. Listen to our latest podcast.

The Gynecologic Health and Disease Branch recently published its scientific vision. The document summarizes its research themes, which provide direction for future research.

Spotlight: What to Know About Endometriosis 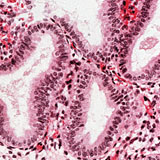 Understanding endometriosis, causes and treatment, is part of NICHD’s mission. Learn more about signs and symptoms.

Over the past year, NICHD contributed to numerous scientific advances and key initiatives.

Getting to Know the New NICHD Director

Some women with PCOS may have adrenal disorder, NIH researchers suggest

A subgroup of women with polycystic ovary syndrome (PCOS), a leading cause of infertility, may produce excess adrenal hormones, according to an early study by researchers at the National Institutes of Health and other institutions.

Endometriosis—an often painful gynecologic condition resulting when uterine tissue grows outside of the uterus—may increase the risk for heart disease, according to a study funded by NICHD and the National Cancer Institute.