The Section on Growth and Development, headed by Jeffrey Baron MD, investigates the cellular and molecular mechanisms governing childhood growth and development. We focus particularly on growth at the growth plate, which drives bone elongation and therefore determines height. One goal of this work is to gain insight into the many human genetic disorders that cause childhood growth failure or overgrowth. A second goal is to explore the fundamental mechanisms that regulate childhood growth, and a third goal is to develop new treatments for children with severe growth disorders.

In the laboratory, we seek to elucidate the molecular and cellular mechanisms by which specific genes and pathways regulate childhood growth, particularly skeletal growth at the growth plate. For these mechanistic studies, we have developed a broad array of approaches, including: cell culture with overexpression and siRNA knockdown, organ culture, and in vivo genetic models. We have investigated growth plate regulation by FGFs , BMPs , C-type natriuretic peptide, retinoids, WNTs, PTHrP/IHH, IGFs, estrogens, glucocorticoids, microRNAs, SOX9 (transcription factor), and EZH2 (a histone methyltransferase). One area of current focus is the epigenetic regulation of growth plate chondrocyte proliferation and differentiation.

Clinical Studies to Identify the Etiology of Growth Disorders

We are using powerful new genetic tools, such as SNP arrays and exome sequencing, to discover new causes of growth disorders in children. Many of the identified genes regulate growth plate chondrogenesis locally. These genes are then explored in the laboratory using molecular and cell biology approaches to confirm their role in the disorder and to explore the molecular pathophysiology.

We are also leveraging our knowledge of growth plate regulation to develop new targeted treatment approaches for severe linear growth disorders. Toward this end, we have constructed fusion proteins that combine paracrine or endocrine proteins that stimulate growth plate chondrogenesis with antibody fragments that target these molecules to the growth plate.

Children growth taller because their bones growth longer. This bone elongation occurs at the growth plate, a cartilaginous structure that is located near the ends of long bones, the short tubular bones of the hands and feet and the vertebrae. The growth plate is composed of three layers: the resting, proliferative and hypertrophic zones (Fig. 1). 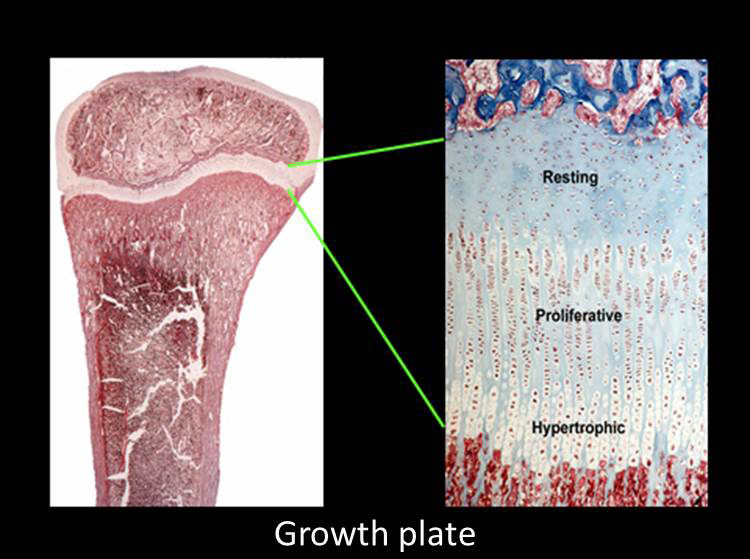 The resting zone serves as a reservoir of progenitor chondrocytes (Abad et al, 2002). The proliferative zone, which contains chondrocytes arrayed in columns, is the site of rapid cell proliferation (Fig. 1) (2). At one edge of the proliferative zone, the cells stop dividing and become enlarged to form hypertrophic chondrocytes (Fig. 1). This cell proliferation and cell hypertrophy, combined with extracellular matrix secretion, result in chondrogenesis, that is, the production of more and more cartilage. In isolation, this chondrogenesis would cause the cartilaginous growth plate to become progressively wider with age. However, simultaneously, blood vessels, osteoclasts, and osteoblasts invade the hypertrophic zone and remodel the newly formed cartilage into bone. The net result is that new bone is formed at the bottom of the growth plate, causing the bones to grow longer and the child to grow taller. 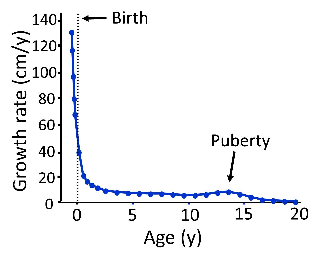 This growth deceleration appears to be due to a mechanism intrinsic to the growth plate which we have termed growth plate senesecence. We have found evidence that senescence occurs because growth plate chondrocytes have a finite proliferative capacity that is gradually exhausted causing growth to slow and finally stop (Nilsson et al, 2014).

Genetic disorders of the growth plate cause substantial morbidity. More than 1 in 5000 children suffer from genetic disorders of the growth plate, which often cause severe short stature and bone deformity. These disorders include skeletal dysplasias, syndromic short stature, and severe, isolated short stature. Our research exploring the fundamental molecular and cellular mechanisms governing longitudinal bone growth may help elucidate the pathophysiology of growth failure and thus lead to improved diagnosis and treatment.