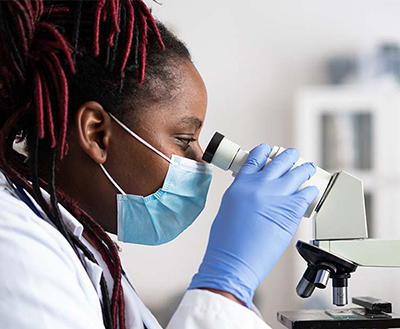 One study led by NICHD researchers found that an experimental drug called TEMPOL could be a promising treatment for COVID-19. The team discovered TEMPOL’s effectiveness by evaluating a more basic question on how SARS-CoV-2 uses its RNA replicase, an enzyme that allows the virus to replicate its genome and make copies of itself once inside a cell. Their findings indicate that the SARS-CoV-2 RNA replicase requires two iron-sulfur clusters to function optimally. Because TEMPOL can degrade iron-sulfur clusters, the researchers tested the drug and found that it can prevent SARS-CoV-2 from making copies of itself. The team’s next steps are conducting animal studies and seeking opportunities to evaluate TEMPOL in a clinical study of COVID-19.

Another NICHD-supported study investigated how a certain segment of the SARS-CoV-2 spike protein helps the virus infect human cells. The researchers found three sites on the spike protein that are involved in a process called S-acylation, which appears critical for the virus’ ability to infect cells. The findings suggest that blocking S-acylation could serve as a potential strategy for developing COVID-19 treatments. The team also developed an experimental system that will make it easier and quicker to investigate the detailed mechanisms of SARS-CoV-2 spike S-acylation and to identify molecules that could block this process.

In addition, NICHD-supported researchers are investigating treatments for specific groups, such as pregnant women and children. Pregnant women are at higher risk for severe illness from COVID-19, but information about treatments for pregnant women is lacking. One NICHD- and NIH-supported study is evaluating the effects on pregnancy of a drug called remdesivir, which is approved by the U.S. Food and Drug Administration for the treatment of COVID-19 in adults and children over age 12 years. Studies like these will give healthcare providers scientific evidence to make more informed decisions when treating pregnant patients.

The outcomes of NICHD’s COVID-19 research will help to inform healthcare practices and provide a foundation for future research.