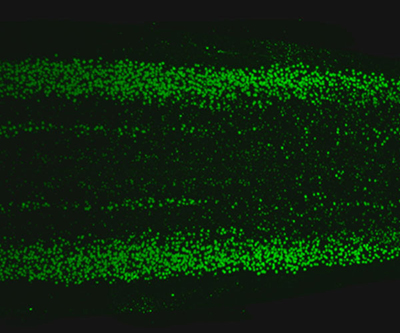 NICHD’s focus on data sharing, new technologies, and research collaboration often leads to advances in a variety of research fields and health conditions.

Nearly all of the four million babies born each year in the United States receive newborn screening for rare genetic diseases that can cause disability or death if left untreated. Follow-up testing for those who screen positive leads to a confirmed diagnosis for nearly 13,000 U.S. newborns annually. However, there is no national system to collect, analyze, and share data on the children’s long-term health outcomes. Over the past decade, NICHD-funded researchers have created the Newborn Screening Translational Research Network (NBSTRN) to support investigators who study newborn screening conditions and their treatments. The NBSTRN developed the Longitudinal Pediatric Data Resource (LPDR) to collect long-term data on infants with these rare diseases to help understand their progression while preserving their identities. The resource offers data and analysis tools to help public health experts, researchers, advocates, policy makers, and clinicians better understand rare diseases, evaluate the impact of early identification, and optimize treatments.

NICHD’s Human Placenta Project (HPP) addresses key unanswered questions about the placenta to better enable physicians to monitor pregnancies better and ultimately help prevent adverse outcomes like preeclampsia, premature birth, or stillbirth. One team of HPP researchers developed a new ultrasound technique to monitor the placenta for impaired fetal blood flow early in pregnancy. The technique, which uses conventional ultrasound equipment, relies on subtle differences in the pulsation of fetal blood through the arteries at the fetal and placental ends of the umbilical cord. Their method provides a way to diagnose circulation problems in the placenta that can harm the fetus and would otherwise go undetected until late in pregnancy.

NICHD researchers also identified and mapped a diverse spectrum of motor neurons along the mouse spinal cord. These neurons, which send and receive messages throughout the body, include a subset that is susceptible to neurodegenerative diseases. The atlas reveals subtypes of neurons in discrete areas throughout the spinal cord and offers insight into how these neurons control movement, how they contribute to the functioning of organ systems, and why some are disproportionately affected in neurodegenerative diseases.

NICHD supports research to improve surgical techniques as well. One team of NICHD-funded researchers evaluated differences between standard amputation surgery and a new approach called agonist–antagonist myoneural interface (AMI). The standard surgical approach to amputation disrupts nerves that connect existing muscles, as well as the natural communication between muscles and the nervous system. Conventional prosthetic limbs also do not provide sensory feedback to the nervous system, so people cannot easily feel the position, speed, or rotation of their prosthetic devices. AMI restores natural physiological muscle pairing and dynamics. It also uses electrodes to communicate with the prosthetic limb, enabling the person to feel the device's position and movement. In the study, researchers selected a group of below-the-knee amputees who had the AMI procedure and matched them to a group who had traditional surgery. The study team found that AMI patients had considerably better motor control and range of motion with less pain and fewer phantom limb sensations. The findings demonstrate the superiority of AMI over traditional surgery.

Another team of NICHD-supported researchers developed a roadmap for understanding the maturation of heart cells called cardiomyocytes. After birth, these cells undergo significant structural and functional changes so the heart can properly circulate blood as the newborn grows bigger. Using a mouse model, the study team found that cardiomyocytes comprise different sizes and genetic activity. They identified a gene called PGC1 that is necessary for regulating the growth and contractility of heart muscle, among other functions. This fundamental, mechanistic study conducted at the single cell level allowed for maturation of cells with appropriate morphologies and functional properties.

NICHD-led research benefits researchers, patients, and healthcare providers in a variety of ways, from technical resources to new tools and procedures.