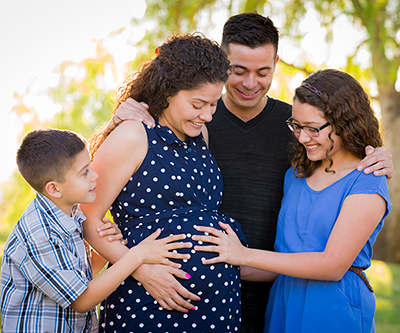 NICHD has long supported research to promote preconception and prenatal care, understanding that a healthy pregnancy can improve the future health of both mother and child.

Researchers from NICHD’s Global Network for Women’s and Children’s Health Research published findings that an inexpensive daily nutritional supplement may provide women in resource-poor settings with enough of a nutritional boost to improve fetal growth. According to the authors, these findings show that it is possible to improve maternal nutrition in poor areas inexpensively, before and in the early stages of pregnancy.

Researchers co-funded by NICHD reported that a 5-minute delay in clamping the umbilical cord after birth may benefit an infant’s developing brain and reduce the risk of iron deficiency and vulnerability to anemia. The delay, a change from the traditional practice of clamping and cutting the cord immediately after birth, allows iron-rich red blood cells to flow from the placenta into the infant’s circulatory system. By 4 months of age, the brains of infants in the study who underwent delayed clamping had more myelin, a brain-insulating material produced by iron-dependent brain cells, compared with the brains of infants whose cords were clamped within 20 seconds of birth.

Preterm labor commonly precedes preterm birth, the leading cause of infant death worldwide. In many cases, premature labor is caused by an inflammatory response from the body’s immune system reacting to a “threat.” NICHD-funded researchers reported that placentas from women who had gone into preterm labor contained large numbers of immune cells called T cells, which trigger a distinct inflammatory response. Examining this response in rodent models led the researchers to discover that giving progesterone to pregnant mice stopped preterm labor by controlling the inflammation. This discovery could help doctors prevent more preterm births in humans.

Opioid use disorder affects approximately 6 out of every 1,000 pregnant women in the United States. It is frequently treated with either buprenorphine or methadone, drugs that can decrease addiction-related craving without creating a high, helping to reduce the risk of drug relapse, overdose, death, pregnancy loss, and preterm birth. Since these drugs work similarly to other opioids, infants born to women taking them may need treatment for drug withdrawal. In an NICHD-funded study, researchers reported that infants born to mothers taking a different treatment, naltrexone, for opioid use disorder showed no signs of drug withdrawal and had shorter hospital stays than infants born to mothers getting the standard treatment of buprenorphine. These findings support the need for a larger multicenter study on the long-term safety and efficacy of naltrexone use among pregnant women.

A study partially funded by NICHD reported results of a mouse study suggesting that excessive weight gain during pregnancy could permanently slow maternal metabolism and lead to weight gain later in life. Study mice that were fed a high-fat diet during pregnancy gained weight but lost it soon after giving birth and resuming a normal diet. Months later, however, the animals began gaining weight, ultimately gaining twice as much as a comparable group of mice fed a lower-calorie diet during pregnancy. While the blood of both groups contained comparable levels of estrogen, the fat cells of the mice that received a high-fat diet were less able to use the estrogen, indicating slower metabolism. Additional studies are needed to determine whether excessive weight gain in human pregnancy also leads to a permanent change in metabolism that contributes to obesity later in life.