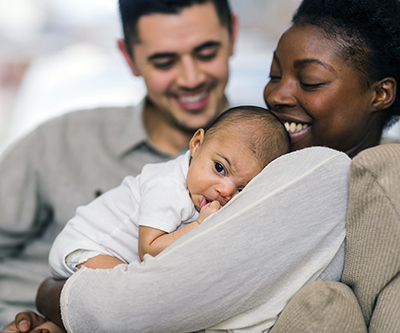 When treating infants with fevers in the emergency room, minutes can mean life or death. Doctors must often perform a costly and invasive spinal tap to confirm a diagnosis of a life-threatening infection. Researchers funded in part by NICHD proposed a protocol for emergency room physicians to rule out these dangerous infections in infants up to 2 months old without a spinal tap. This new protocol, which measures levels of bacteria in the urine and two other elements in infants’ blood to rule out serious infections, could also help reduce or eliminate the need for unnecessary antibiotics or hospital stays. The researchers say that more work is needed to verify this protocol before it can be broadly implemented in hospitals.

NICHD-funded research also led to a label update for the drug acyclovir, a medicine used to treat herpes simplex virus. As a result of this research, the label now includes dosing instructions for treating herpes infection in newborns up to 3 months of age. Infants may become infected with the virus during or shortly after birth and, if left untreated, could experience serious complications, including blindness and death. The data that informed the label change resulted from Best Pharmaceuticals for Children Act (BPCA) research, an initiative that specifically studies drugs commonly prescribed in infants and children but not specifically tested in those groups.

A study partially funded by NICHD reported that preterm infants who had been treated with antibiotics for more than 20 months had less diverse bacteria in their guts and that those bacteria had more antibiotic-resistant genes. Researchers compared stool samples from preterm infants treated with antibiotics for 21 months to samples from preterm infants treated only for a week and from healthy infants who had not been treated. Other research has linked antibiotic treatment early in life with health problems later in life, including psoriasis, obesity, and allergies. These new findings suggest that early antibiotic use may contribute to these health problems by allowing more harmful bacteria to flourish.

NICHD researchers reported that babies born to women who were exposed to high levels of air pollution in the week before delivery were more likely to be admitted to the neonatal intensive care unit (NICU). The study analyzed more than 27,000 singleton infants admitted to the NICU over the course of 7 years in relation to air quality data and found that exposure to high levels of fine particles and other pollutants found in car exhaust and industrial processes was linked to higher risk for NICU admission. This is the first study to look at this association, and if the results are replicated, reducing women’s exposure to pollutants before delivery may help reduce the incidence of NICU admissions.

A related study led by the same NICHD researchers reported that pregnant women who were exposed to higher air pollution levels in their second pregnancy than in their first may have a higher risk of preterm delivery (before 37 weeks of pregnancy)—a leading cause of infant death in the United States—compared with their first pregnancy. Surprisingly, the researchers found that this association was true even for women at low risk who had never had a preterm delivery. This study adds to a growing portfolio of research linking air pollution and poor pregnancy outcomes.