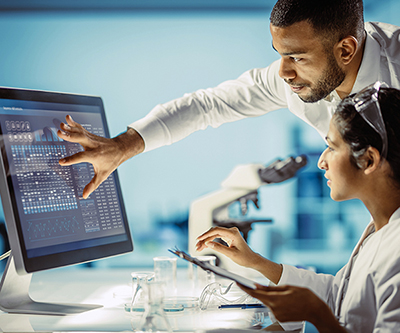 NICHD research aims to prevent and treat a variety of diseases and conditions that affect children and adults in the United States and around the world.

NIH-funded researchers presented findings at the International AIDS Society Conference showing that the risk of neural tube defects is slightly higher for babies whose mothers’ HIV therapy contained the drug dolutegravir when they became pregnant. Neural tube defects, such as spina bifida, are abnormalities affecting the brain and spinal column. The study, which tracked birth outcomes in Botswana, provides important information for healthcare providers who treat women of child-bearing age with HIV.

Fragile X syndrome, the most common inherited form of intellectual and developmental disability, results from a change in the FMR1 gene on the X chromosome. Some people have only a small change in the FMR1 gene—called a premutation; they don’t have Fragile X syndrome but are considered carriers of the condition. NICHD-supported researchers reported that these premutation carriers may be at higher risk for several health conditions, including depression, anxiety, mood disorders, sleep apnea, respiratory and stomach problems, and bone fractures. Previous research linked the premutation to higher risk for only tremor and ataxia symptoms and for early menopause. The study suggests that the FMR1 premutation is associated with a wider range of symptoms and health effects than was previously known. This new knowledge may help inform the healthcare of FMR1 premutation carriers.

NICHD-supported research shed light on why people with traumatic brain injuries (TBIs) are more susceptible to bone loss and bone fractures. Using a mouse model, the researchers found that a TBI activates proinflammatory signals in bone marrow, which in turn spur the development of bone-resorbing cells called osteoclasts. The authors propose that inhibiting the initial proinflammatory signaling could potentially reverse bone loss and reduce fracture rates in people with TBIs.