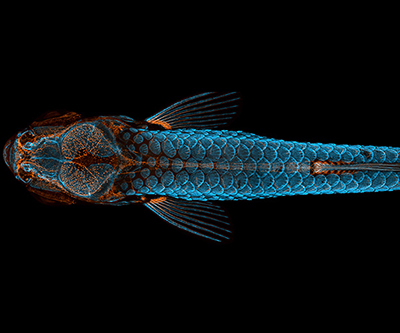 NICHD’s focus on technology research often leads to advances and treatments that directly benefit patients of all ages and backgrounds.

Last year, NICHD researchers took the top prize in the 46th annual Nikon Small World Photomicrography Competition for a photo of a juvenile zebrafish. The winning photo was taken using confocal microscopy and merges 350 individual images to reveal a top view of a zebrafish with a fluorescently “tagged” skeleton, scales, and lymphatic system. In addition to its beauty and clarity, the image is significant because it was taken as part of an effort that led to a groundbreaking discovery: zebrafish have lymphatic vessels inside their skull. These vessels were previously thought to occur only in mammals, and their discovery in fish could expedite and revolutionize research related to treatments for diseases that occur in the human brain, including cancer and Alzheimer’s.

In one NICHD-funded study, researchers adapted non-invasive prenatal testing methods, which are currently used to diagnose genetic disorders in the fetus, to help predict other types of pregnancy complications, like gestational diabetes and preeclampsia. The study team developed a method to identify traces of genetic material called cell-free DNA that is shed from the placenta and other organs into a woman’s bloodstream during pregnancy. Then, the team found certain patterns in these genetic traces that were linked to gestational diabetes and preeclampsia. These patterns were apparent as early as the first trimester, well before these conditions are diagnosed with existing tests. Overall, the findings show that such genetic signatures can be detected early and may serve as biomarkers to identify pregnant women at risk for certain pregnancy-related complications.

Another team of NICHD-supported scientists developed a better way to run diagnostic blood tests for newborns. Obtaining blood samples from pediatric patients is challenging, and for newborns, it can lead to cumulative blood loss that causes anemia and other health problems. The researchers used very small volumes (less than 50 microliters) that are akin to drops of blood. Their digital microfluidic testing platform is much faster and easier to use compared to current testing methods, and they developed more than two dozen unique tests, each with important clinical application to newborns and pediatric patients.

In another study, NICHD-funded researchers made an important advance in the field of medical rehabilitation and brain-controlled prosthetics. Typically, people who use these types of devices require daily “retraining” that takes time and limits the degree to which a person can control their device. NICHD-supported researchers bypassed this daily calibration by adding a machine learning component to their algorithms. Their so-called “plug and play” interface shortened the time required for a user to “master” their device. The new interface even allowed the user to “remember” how to use their device without the need for any recalibration or retraining for more than 40 days. Such quick and stable use can potentially transform the field of brain-controlled prosthetics.

Researchers supported by NICHD are advancing neuroimaging methods to improve the recovery of stroke patients. The study team identified a way to use neuroimaging results, particularly low-frequency oscillations, as a biomarker for a person’s degree of injury and their potential to regain the ability to move after experiencing a stroke. These findings are especially important because the effects of stroke vary widely from person to person. Identifying patients who may benefit from a certain type of treatment or rehabilitation approach can help tailor treatments and optimize recovery.

Last but not least, a different team of NICHD-funded researchers developed a flexible material that can potentially transform surgical implants for neurological devices. A major limitation of using these bioelectronics is that infants, children, and adolescents outgrow implants and often need additional surgeries to replace their devices. The study team developed “morphing electronics” that can adapt to a patient’s growth. In their study, the team successfully implanted their devices in rats with minimal damage to the sciatic nerve as the animals grew bigger and older. With additional studies, the work offers a path to improve pediatric surgical care for neurological disorders and injuries.