Understanding the Effects of COVID-19 on Pregnant Women 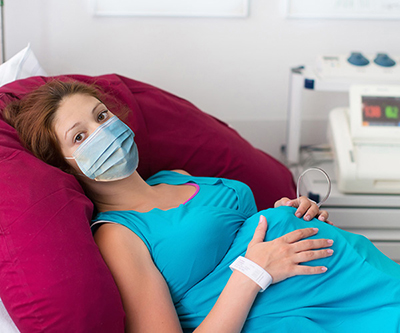 NICHD is committed to helping pregnant women and their families safeguard their health during the pandemic. The institute initiated several large-scale studies in the United States and abroad, with more projects planned for 2021.

One national project seeks to determine the effects of the pandemic on outcomes during and after pregnancy in the United States. Researchers are analyzing medical records of pregnant women to evaluate whether changes to healthcare delivery that were implemented as a result of the pandemic have led to higher rates of pregnancy-related complications and cesarean delivery. For women with confirmed infections, the researchers will also monitor their health for six weeks after childbirth.

A global study is tracking the prevalence of SARS-CoV-2 on pregnant women in low- and middle-income countries. The study will screen 16,000 pregnant women, and researchers are collecting data on symptoms and assessing the presence of antibodies to SARS-CoV-2. They also will gauge the women’s knowledge and attitudes toward COVID-19, including safety, protective practices, and prenatal care. The study uses an existing maternal and newborn health registry to collect information on pregnancy outcomes for the women, as well as outcomes for their newborns. The study is conducted in Guatemala, Bangladesh, India, Pakistan, Kenya, the Democratic Republic of Congo, and Zambia.

NICHD is also studying how the virus enters a host cell to cause infection. For example, NICHD researchers reported that the placenta lacks the cellular instructions to produce major molecules used by the SARS-CoV-2 virus to cause infection. To infect a cell, the virus requires two major components—a receptor called ACE2 and an enzyme called TMPRSS2—to be present in a cell at the same time. The placenta does not appear to co-express these two components. These findings suggest that even if a pregnant woman is infected, she is unlikely to pass the virus to her fetus through the traditional cell entry mediators. This contrasts with other viral infections, such as Zika or cytomegalovirus.

In line with these results, a subsequent NICHD-supported study found that pregnant women who were infected with SARS-CoV-2 during the third trimester did not pass the infection onto their newborns. The researchers did not find significant differences between levels of SARS-CoV-2 antibodies produced by pregnant and non-pregnant women. However, the study team did observe lower-than-expected levels of protective antibodies in umbilical cord blood, which may indicate that the antibodies do not pass easily through the placenta to the fetus. This is in contrast to how pregnant women respond to an influenza infection. More work is needed to understand how this may impact a newborn’s immunity and improve strategies for vaccinating pregnant women.