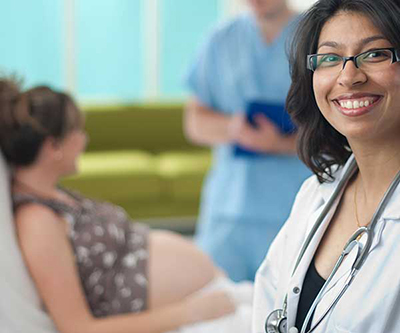 With its establishment in 1962, NICHD became the first NIH institute to focus on maternal health, including the “special health problems and requirements of mothers and children and … the processes of human growth and development, including prenatal development” (Public Law 87-838). Little was known about the relationship between the prenatal environment and long-term health, how disease processes differ between men and women, or how pregnancy affects a woman’s health later in life. The home pregnancy test was not even available until 1978, after NICHD researcher Judith Vaitukaitis, M.D., initially developed the test to diagnose certain types of cancer.

As medical care shifted to focus more on evidence from clinical trials, women’s health researchers—especially pregnancy researchers—found themselves at a disadvantage. To gather appropriate evidence that can be generalized to the population, clinical trials need large numbers of participants from diverse backgrounds. Even large cities did not have enough diverse women who were pregnant at the same time to adequately test an intervention or treatment. In addition, medicine and technology were changing rapidly, and the field began adopting “standard” practices that had not been properly tested.

To address the need for rigorous clinical trials in maternal-fetal medicine, NICHD created the Maternal-Fetal Medicine Units (MFMU) Network in 1986. Goals of the network were to reduce maternal, fetal, and infant mortality related to preterm birth, fetal growth problems, and maternal complications (and to provide the rationale for evidence-based, cost-effective obstetric practices). The network had multiple sites throughout the United States, and each site used the same study designs, followed the same procedures for enrolling participants, and collected the same data in the same way as other sites. Network activities were overseen by a single Data and Safety Monitoring Committee and used a single Data Coordinating Center to store and analyze data. These features may seem common today, but in 1986, the network was the first to apply these features to studies of pregnant women.

The MFMU Network provided a framework for conducting large multicenter randomized clinical trials and other clinical studies in maternal-fetal medicine. Its common processes and shared resources made the network both cost-effective and efficient by eliminating the need for new infrastructure, staff, and logistics for each study.

Since then, the network has helped advance our understanding of maternal-fetal medicine in many ways, including:

The MFMU Network framework was applied to other areas of research, including neonatology and obstetric and pediatric pharmacology. NICHD’s experiences with studying pregnant women and preterm infants also helped inform research efforts on specialized topics such as stillbirth and maternal-fetal surgery.

Understanding and improving maternal health remains a top priority for NICHD. In 2017, NICHD was asked to lead the Task Force on Research Specific to Pregnant Women and Lactating Women (PRGLAC). Established by the 21st Century Cures Act, the task force advises the Secretary of Health and Human Services about research on treatments for pregnant women and nursing mothers. In 2018, PRGLAC submitted a report to the secretary (PDF 7 MB) with 15 recommendations. The task force was recently renewed for another 2 years to help implement the recommendations.