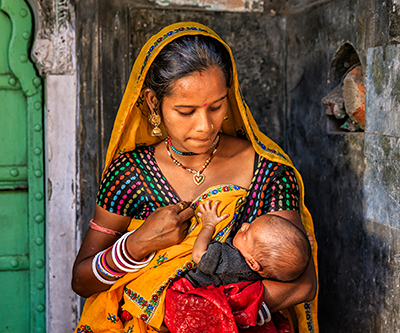 NICHD supports research and training in areas outside the United States. In 1998, it established the Office of Prevention Research and International Programs, a precursor to its current Office of Global Health, which partners with several organizations to promote NICHD’s global health mission.

In 2001, NICHD partnered with the Bill & Melinda Gates Foundation to start the Global Network for Women’s and Children’s Health Research. This public–private partnership, which continues today, supports and conducts clinical trials in resource-limited countries by pairing U.S. investigators with senior researchers in different countries.

Some findings from Global Network researchers include the following:

In addition, NICHD-funded researchers in Uganda found that a two-drug regimen dramatically reduces the severity of malaria during pregnancy and provides a treatment alternative for areas where the malaria-causing parasite Plasmodium falciparum has grown resistant to standard treatment. The World Health Organization reports that 430,000 people died from malaria in 2017,1 with pregnant women and children younger than 5 years of age among the groups at highest risk for death and severe health problems. Other NICHD research identified the mechanism used by P. falciparum to obtain nutrients from red blood cells. The findings may lead to the development of new drugs that block this transport, effectively “starving” the parasite.