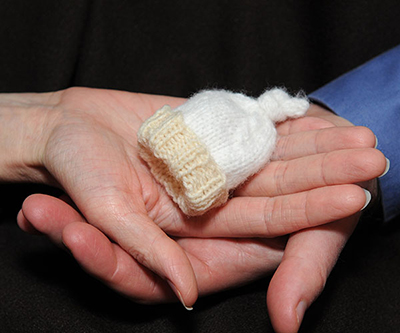 Some pregnancy losses occur very early, sometimes before a woman even knows she is pregnant. Current knowledge about pregnancy loss is limited, and there is no way to stop the loss from occurring once it has started. Understanding factors and mechanisms involved with pregnancy loss could shed light on ways to intervene or possibly prevent it.

Some highlights of NICHD research on pregnancy loss include the following:

In 2014, NICHD launched the Human Placenta Project (HPP) to apply cutting-edge technology to the study of the placenta, a temporary organ that links mother and fetus. For example, HPP researchers found that a type of imaging called BOLD MRI may be useful in assessing the function of the placenta. Problems with the placenta, its development, and its function could be central to pregnancy loss and stillbirth.

NICHD researchers and colleagues at other institutions found that misoprostol offers an alternative to surgical treatment after pregnancy loss by causing the uterus to expel any remaining tissue. Misoprostol stimulates uterine contractions and is often used to help labor progress. Because the drug is inexpensive and does not require refrigeration, it was tested as a treatment for postpartum hemorrhage (heavy bleeding following childbirth) in developing countries. Follow-up research from NICHD found that the drug was effective at treating postpartum hemorrhage and reducing maternal death.

Healthcare providers have often advised couples to wait at least 3 months after a pregnancy loss before attempting a new pregnancy. However, a 2016 NICHD study found no medical reason that women should delay pregnancy attempts after experiencing a pregnancy loss without complications. In fact, findings suggested that a shorter timeframe improved the chances of a live birth.