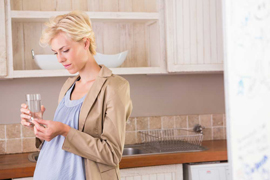 The study, appearing in JAMA Internal Medicine, was conducted by researchers at NIH's Eunice Kennedy Shriver National Institute of Child Health and Human Development (NICHD) and other institutions.

Nausea and vomiting that occurs in pregnancy is often called "morning sickness," as these symptoms typically begin in the morning and usually resolve as the day progresses. For most women, nausea and vomiting subside by the 4th month of pregnancy. Others may have these symptoms for the duration of their pregnancies. The cause of morning sickness is not known, but researchers have proposed that it protects the fetus against toxins and disease-causing organisms in foods and beverages.

"It's a common thought that nausea indicates a healthy pregnancy, but there wasn't a lot of high-quality evidence to support this belief," said the study's first author, Stefanie N. Hinkle, Ph.D, a staff scientist in NICHD's Epidemiology Branch. "Our study evaluates symptoms from the earliest weeks of pregnancy, immediately after conception, and confirms that there is a protective association between nausea and vomiting and a lower risk of pregnancy loss."

For their study, Dr. Hinkle and her colleagues analyzed data from the Effects of Aspirin in Gestation and Reproduction (EAGeR) trial, in which researchers tested whether taking daily low-dose aspirin prevents women who experienced one or two prior pregnancy losses from experiencing a future loss.

The authors looked at data from all the women in the study who had a positive pregnancy test. The women kept daily diaries of whether they experienced nausea and vomiting in the 2nd through the 8th week of their pregnancies and then responded to a monthly questionnaire on their symptoms through the 36th week of pregnancy. The study authors noted that most previous studies on nausea and pregnancy loss were not able to obtain such detailed information on symptoms in these early weeks of pregnancy. Instead, most of studies had relied on the women's recollection of symptoms much later in pregnancy or after they had experienced a pregnancy loss.

In the EAGeR trial, a total of 797 women had positive pregnancy tests, with 188 pregnancies ending in loss. By the 8th week of pregnancy, 57.3 percent of the women reported experiencing nausea and 26.6 percent reported nausea with vomiting. The researchers found that these women were 50 to 75 percent less likely to experience a pregnancy loss, compared to those who had not experienced nausea alone or nausea accompanied by vomiting.