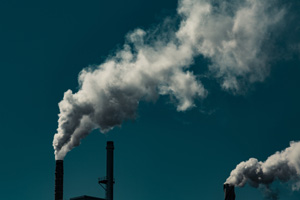 Exposure to common air pollutants, such as ozone and fine particles, may increase the risk of early pregnancy loss, according to a study conducted by the National Institutes of Health. The study appears in the journal Fertility and Sterility.

Ozone is a highly reactive form of oxygen that is a primary constituent of urban smog. Researchers followed 501 couples attempting to conceive between 2005 and 2009 in Michigan and Texas. The investigators estimated the couples’ exposures to ozone based on pollution levels in their residential communities. Of the 343 couples who achieved pregnancy, 97 (28 percent) experienced an early pregnancy loss—all before 18 weeks. Couples with higher exposure to ozone were 12 percent more likely to experience an early pregnancy loss, whereas couples exposed to particulate matter (small particles and droplets in the air) were 13 percent more likely to experience a loss.

The researchers do not know why exposure to air pollutants might cause pregnancy loss, but it could be related to increased inflammation of the placenta and oxidative stress, which can impair fetal development. The findings suggest that pregnant women may want to consider avoiding outdoor activity during air quality alerts, but more research is needed to confirm this association.

The study was led by Pauline Mendola, Ph.D., an investigator at NIH’s Eunice Kennedy Shriver National Institute of Child Health and Human Development (NICHD). Her team previously found that ozone increased the risk of stillbirth. Dr. Mendola and her colleagues have also examined the effects of air pollution and extreme temperatures on other adverse outcomes of pregnancy.

To arrange an interview with Dr. Mendola, please call Meredith Daly at 301-496-5133 or e-mail nichdpress@mail.nih.gov.