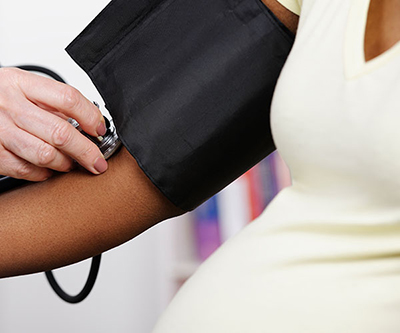 Preeclampsia continues to be a leading cause of maternal and fetal death as well as preterm birth in the United States. It is characterized by a sudden increase in blood pressure after the 20th week of pregnancy. NICHD research has contributed significantly to the understanding of preeclampsia and to new ways of detecting, treating, and preventing it.

In the past, preeclampsia was known as “toxemia” because it was thought that a toxin in the body caused the problems associated with the condition. In 2004, NICHD-funded researchers found that this may be true when they discovered elevated blood levels of a substance known as soluble fms-like tyrosine kinase 1 (sFlt-1) in women with preeclampsia. Levels of sFlt-1 began to increase about 5 weeks before preeclampsia developed. They also found lower levels of placental growth factor (PIGF) in women who later developed preeclampsia.

This body of research led to screening tests for women at risk of preeclampsia. Such screening helps to ensure that appropriate treatment can occur before the condition becomes life-threatening. Current practice guidelines in the United States rely on blood pressure readings and detecting protein in the urine to diagnose preeclampsia. But the United Kingdom’s National Health Service (NHS) recently announced  that it would start using a PIGF test to help screen for the condition. The NHS decision was based on a study of the test  in more than 1,000 women with suspected preeclampsia from 11 maternity units in U.K. hospitals. That research showed that the test led to earlier diagnosis and 20% fewer complications, including stroke and maternal death, among women in the study. Depending on the study’s outcomes, U.S. healthcare providers may also explore using these tests to accelerate diagnosis and treatment.

Developing effective preventions and treatments for preeclampsia are at the forefront of NICHD research goals. Researchers have explored several methods for preventing preeclampsia. Many of them—including calcium and vitamins C and E—were not effective. However, results from the Effects of Aspirin in Gestation and Reproduction (EAGeR) study showed that among women at moderate to high risk for preeclampsia, a low-dose aspirin taken daily starting in the second trimester of pregnancy significantly reduced the risk of the condition. The results, taken with other research findings, led the American College of Obstetricians and Gynecologists and the U.S. Preventive Services Task Force to start recommending low-dose aspirin for women at moderate to high risk for preeclampsia, beginning between weeks 12 and 16 of pregnancy.

Finally, recent results from an NICHD-funded study in mice and nonhuman primates described a promising method, known as RNA interference (RNAi), to treat preeclampsia. Researchers used snippets of modified RNA to block the materials needed to produce sFlt-1. The technique restored the animals’ blood pressure to normal levels and eliminated the abnormal quantities of urinary protein that occur with preeclampsia. Researchers are hopeful that this work can be translated into humans with the same level of success.