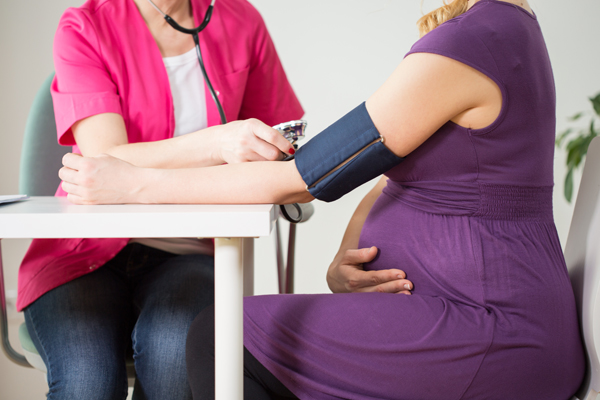 In studies of mice and nonhuman primates, researchers funded by the National Institutes of Health have used a technique known as RNA interference to reduce high levels of a protein that can cause preeclampsia, a potentially fatal high blood pressure disorder of pregnancy. The study appears in Nature Biotechnology and was supported by NIH’s Eunice Kennedy Shriver National Institute of Child Health and Human Development and the NIH Common Fund.

Preeclampsia can result from overproduction of the protein sFlt1 in the placenta. The protein circulates in the bloodstream and acts like a decoy—binding to compounds that would otherwise attach to receptors on blood vessel walls. Deprived of these compounds, the blood vessels deteriorate, leading to the dangerously high blood pressure in the woman and depriving the fetus of essential oxygen and nutrients. Although preeclampsia often can be treated, it has no cure, other than immediate delivery of the fetus.

In the current study, researchers used snippets of modified RNA to block the messenger RNA needed to produce sFlt1. Using the technology, the researchers reduced circulating sFLT1 levels in pregnant mice by 50 percent. Similarly, the researchers used this RNA interference technique to reduce sFLT1 levels in pregnant baboons with a laboratory-induced form of preeclampsia, restoring the animals’ blood pressure to normal levels and eliminating the abnormal quantities of urinary protein that occurs in the condition. Offspring of the mice and the baboons showed no apparent ill effects from the treatment. The researchers add that additional studies to refine the technology in baboons are needed before studies in humans can begin.

Ekaterini Tsilou, M.D., NICHD Obstetrics and Pediatric Pharmacology and Therapeutics Branch, is available to comment on this study.