Saving Lives in the Golden Minute 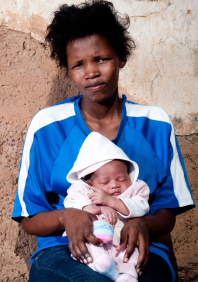 About 1 million newborn babies around the world die each year from birth asphyxia—a lack of oxygen to the brain—in the moments before, during, and right after birth, according to the World Health Organization. Often these deaths occur in areas where resources and access to technology is limited.

But a recent initiative—called Helping Babies Breathe® (HBB)—is showing that seemingly simple interventions by trained health care providers during the “golden minute”—the first minute after birth—can help newborns survive. The initiative, launched in 2010, is already reducing the number of infant deaths from birth asphyxia and is earning recognition from public health and community leaders.

The HBB initiative provides training to skilled birth attendants who typically assist with childbirth in rural and resource-limited settings. The program is straightforward: it shows health care providers, including midwives and doctors, some basics of newborn care during the Golden Minute. Using such tools as neonatal simulators, resuscitation bags, flip charts, and workbooks, birth attendants are taught how to dry and warm babies, open their airways, and position them correctly for breathing and how to use a bag-and-mask respirator to ventilate babies who do not respond to initial care. These simple measures have been shown to save lives.

HBB is now active in more than 30 countries thanks to the Global Development Alliance, an innovative public-private alliance that includes the NICHD, the American Academy of Pediatrics, the United States Agency for International Development (USAID), and other public and private organizations. The NICHD will lead a multicountry evaluation to study the program’s impact on lives saved.

was also instrumental in evaluating the HBB program before it was widely used. The Network conducted the first randomized controlled trial of neonatal resuscitation training in six international sites in Asia, Sub-Saharan Africa, and Latin America. The First Breath trial was published in New England Journal of Medicine (PubMed ID: 20164485) and demonstrated that essential newborn care reduces stillbirths without increasing neonatal deaths. For more information on this study, visit the NICHD news release: Stillbirths Drop Dramatically After Newborn-Care Training in Developing Countries.

A study in Zambia, before the large First Breath trial, showed that resuscitation training was associated with a reduction in the neonatal mortality rate during the first week from 11.5 deaths to 6.8 deaths for every 1,000 live births. For more information on this study, visit the NICHD news release: Instruction for midwives lowers death rate for newborns in Zambia.

The initial successes of the HBB program are already garnering recognition from the global public health community.

The USAID recently awarded the HBB program 2011 Global Development Excellence Award. The selection committee noted the program’s “game-changing innovations,” and its focus on scaling up, for instance by deploying master trainers who will teach new birth attendants. To date, 33,000 health care providers worldwide have been trained in the HBB program. USAID also noted the financial nimbleness of the program, which has mobilized $23 million in cash and in-kind contributions from partners such as the Latter-day Saint Charities.

Recognition also comes from Women Deliver, a global health advocacy organization for women and girls, based in New York City. Helping babies breathe made the list for Women Deliver’s 50 most inspiring ideas and solutions delivering for women. More than 6,000 people from 103 countries voted, placing HBB at number three in the “innovations” category.

The ultimate goal of the HBB initiative is to have at least one person skilled in neonatal resuscitation at the birth of every baby worldwide. As the program ramps up, it could go a long way toward helping to meet the internationally agreed upon target—a United Nations Millennium Development Goal—of reducing child mortality by two-thirds from 1990 to 2015. The NICHD will track the progress of the initiative, while also monitoring the outcome and quality of the program.
For more information, select one of the links below: