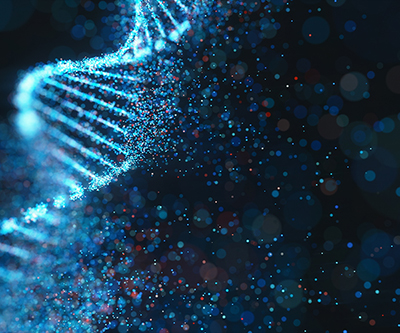 Meiosis is the process of cell division that creates gametes (sperm and eggs), which contain only half the genetic material of a regular cell. Understanding meiosis—how it’s regulated and how it differs across species—offers insight into evolution, development, and infertility.

An essential step of meiosis is recombination, where sections of DNA are broken and then reshuffled among paternal and maternal chromosomes to create new arrangements of genes in gametes. This process ensures genetic diversity among offspring. It’s also tightly controlled, and genetic “hotspots” for recombination sites are influenced by various factors. Researchers in the Macfarlan Lab discovered a novel system that controls meiotic recombination in mammals.

In many species, including humans, hotspots are determined by special tags in DNA called histone marks. In yeast, plants, and birds, hotspots are defined by a sub-class of histone marks that tend to occur near the beginnings of genes. But in mammals, the locations of hotspots are mostly away from genes and defined by another sub-class of histone marks, thanks to a protein named PRDM9, which is absent in yeast, plants, and birds. PRDM9 is a DNA-binding enzyme that creates the histone tags necessary to locate recombination hotspots in mammals. Previous research has shown that male and female mice lacking PRDM9 are infertile, as are men with mutations in PRDM9.

The Macfarlan Lab identified a second essential protein, called ZCWPW1, that works with PRDM9 to control recombination patterns. If PRDM9 is the “barcode writer,” ZCWPW1 serves as the “barcode reader” that recognizes the histone tags. According to the study authors, ZCWPW1 likely serves to repair (not initiate) the DNA breaks at the hotspots. The research team also found that male mice lacking ZCWPW1 are infertile, while female mice develop ovarian insufficiency, a condition where ovaries stop working at a young age. These findings suggest distinct sensitivities in males and females for meiotic defects.

Learn more about the Genetics and Epigenetics of Development Group: https://www.nichd.nih.gov/about/org/dir/affinity-groups/GED.