Understanding the Synthesis of Collagen 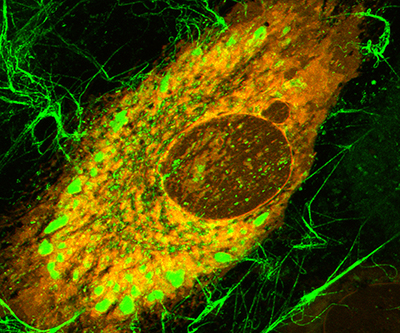 Collagen fibers provide the structural support for the body by forming the scaffolds of bones, skin, tendons, ligaments, cartilage, and other tissues and organs. Collagen fiber synthesis is crucial for the health of normal tissues, and problems with it are linked to rare genetic diseases, as well as common disorders such as fibrosis and osteoporosis.

Researchers know that procollagen, a precursor to collagen, is assembled in a cellular compartment called the endoplasmic reticulum, or ER. It is later transported to the Golgi apparatus, which enables the cell to secrete procollagen and form collagen fibers.

One of the longstanding mysteries of procollagen synthesis and its transport from the ER to the Golgi is the role of a chaperone protein, HSP47. Previous research suggests that HSP47 chaperones both the assembly of procollagen and its transport to the Golgi before the protein is recycled back into the ER. Mutations affecting these reputed HSP47 functions have been linked to a severe fragile bone disorder called osteogenesis imperfecta.

The Leikin Lab developed a new technique to live-image cells called osteoblasts making and secreting procollagen in bone. Compared to prior studies that relied on still images of fixed cells, the Leikin Lab’s timelapse imaging showed that procollagen is exported from the ER without HSP47. Their work suggests a new role for HSP47 in procollagen quality control at ER exit sites.

In the study, HSP47 appears to direct abnormal procollagen molecules to lysosomes for degradation rather than to the Golgi for secretion. Knowing this quality control process will help researchers from the lab better understand how procollagen and HSP47 mutations cause osteogenesis imperfecta. Eventually, the research may lead to effective treatments for this and other bone disorders.

Learn more about the Bone and Matrix Biology in Development and Disease Group: https://www.nichd.nih.gov/about/org/dir/affinity-groups/BMBDD.