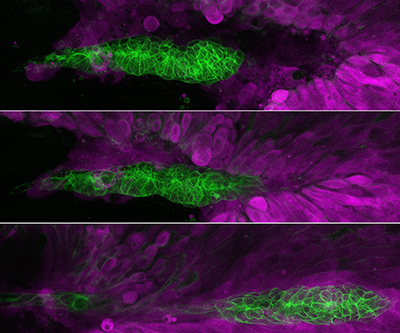 When an embryo develops, cell migration is a fundamental process that ensures the body forms properly. Problems with cell migration during these key stages of growth can lead to birth defects and developmental disorders. Research also suggests that cell migration contributes to metastasis of certain cancers when cells migrate from the primary tumor.

The Chitnis Lab uses zebrafish as a model organism to study cell migration during embryonic development. Traditionally, researchers used a two-dimensional model of cells in culture to study migration. However, it became clear that findings from these models were not always accurate. Now, teams like the Chitnis Lab use three-dimensional, live imaging methods to answer developmental questions.

In one study led by Dr. Damian Dalle Nogare, the lab published important findings on how zebrafish cell migration and patterning occurs during development. They studied a group of cells called the zebrafish posterior lateral line primordium (PLLp), which migrates toward the tail of a zebrafish embryo over the course of 24 hours. The PLLp is directed by signals called Cxcl12a and fibroblast growth factor, and the cells eventually form a sensory system that helps fish detect water flow.

The study team identified additional mechanical and chemical mechanisms that control the migration of PLLp, namely that the cells must extend projections called lamellipodia against the top layer of skin cells and not just against cells underneath that are deeper in the tissue. In fact, the lab discovered that the presence of overlying skin is essential for proper PLLp migration.

The lab also found that lamellipodia that contact the overlying skin depend on fibroblast growth factor, and the formation of these projections is disrupted when the overlying skin is removed. The team found that replacing the skin with Matrigel (an artificial substrate commonly used in cell culture studies) restored the formation of lamellipodia. However, these lamellipodia did not orient correctly, suggesting that the skin provides additional cues for cell migration.

Overall, the lab’s observations support a key role for superficial primordium cells and the skin in directed migration of the PLLp.