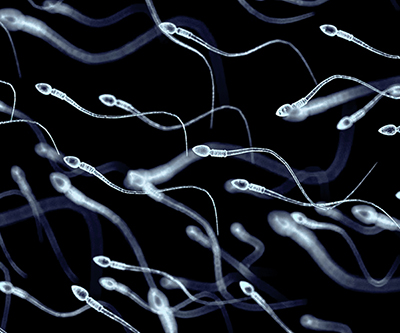 The Dufau Lab studies a protein that is found in the testes and is essential for making healthy sperm. It is called Gonadotropin Regulated Testicular Helicase (GRTH/DDX25), and it serves several functions that enable germ cells to eventually become sperm. Previous work from the lab has shown that 5% of a population of infertile Japanese men have a specific mutation in GRTH. Using cells that have this mutant form of GRTH, the study team found that the mutation prevents the phosphorylation of the protein (a process that tags GRTH with the chemical moiety phosphate) by one of the many enzymes that carries out this tagging reaction—protein kinase A (PKA). Mice that were genetically engineered to carry the human mutation in the mouse version of GRTH also lack phosphorylated GRTH and are devoid of sperm, owing to a failure of round spermatids to elongate. Therefore, targeting human GRTH could potentially serve as a non-hormonal male contraceptive.

In a more recent study, the Dufau Lab identified the site of PKA phosphorylation on GRTH as T239 (T is the amino acid threonine, one of the 20 building blocks of all proteins). Phosphorylation of T239 by PKA activates GRTH function. Importantly, when looking at the three-dimensional folded structure of GRTH, T239 is close in proximity to the previously identified human mutation that impairs sperm production in mice. The study team found that additional GRTH mutations at the interface with PKA can cause structural changes in the GRTH protein and thereby block phosphorylation at T239 by PKA and, thus, the competence of GRTH.

Collectively, these findings map important structural elements within GRTH that can aid the development of a male contraceptive. If researchers can identify drugs that either mimic the human mutation or can block access of T239 to PKA, scientists can study whether these drugs are safe and develop effective, reversible oral contraceptives for men.

Learn more about the Cell Regulation and Development Group: https://www.nichd.nih.gov/about/org/dir/affinity-groups/CRD.