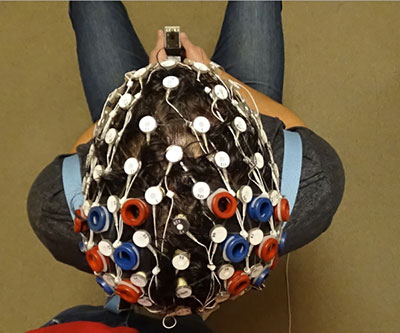 Researchers studying brain activity have a variety of tools to characterize neural activity, but there are limitations to each approach. Multimodal neuroimaging combines data collected from more than one technique, where one technique’s strength can help compensate for another’s weakness.

The action observation network (AON)—a network of brain regions involved in the execution and observation of an action—is active when a person either carries out an action or observes someone else doing it. Therefore, the AON is proposed to have “mirroring” abilities and is important in social neuroscience. Moreover, AON is associated with sophisticated social and learned behaviors that emerge in typically developing infants, such as complex imitation and shared emotion. However, most studies of the AON use a technique called electroencephalography (EEG), which provides excellent temporal resolution but poor spatial resolution.

In a study from the Gandjbakhche Lab, researchers developed a multimodal approach to study the AON. They combined EEG with functional near-infrared spectroscopy (fNIRS), a technique that offers great spatial resolution and is not affected by motion, for example, when a study subject has to move in the experiment. fNIRS is also non-invasive, cost-effective, and easier to use than other methods.

The study team developed an algorithm to process the data obtained from both methods. Their technique addresses problems common in medical data processing, such as small sample size, and they showed that their approach offered more specific information than either technique could provide alone. These new methods open the possibility for new experimental designs to study how the AON functions. Moreover, understanding the neural correlates of AON can aid researchers who study the AON in pediatric development, as well as those who study intellectual or developmental disabilities, such as autism spectrum disorders (ASD).