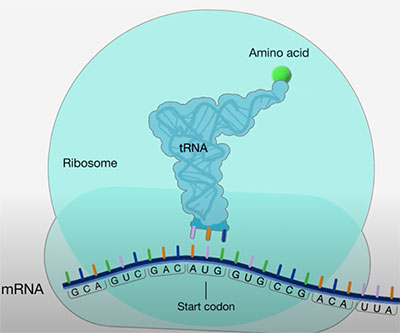 The Dever Lab and colleagues analyzed mammalian mRNA sequences to identify mRNAs with start codons in poor sequence contexts. They identified several Hox genes whose translation is sensitive to changes in the stringency of start codon selection. Hox genes encode proteins that specify the body plan of an embryo, ensuring that the correct structures form in the correct places of the body.

The investigators conducted several experiments to evaluate the translation of these Hox genes when the stringency of start codon selection is altered—for example, by changing eIF1 and eIF5 levels. They found that translation of Hox genes with the main ORF start codon in a poor sequence context was reduced in conditions of high stringency. In contrast, translation of the Hox mRNAs with upstream ORF start codons in a poor sequence context was enhanced in conditions of high stringency. These findings illustrate how changes in start codon selection stringency have the potential to regulate the synthesis of specific proteins to control development.

Learn more about the Cell Regulation and Development Group: https://www.nichd.nih.gov/about/org/dir/affinity-groups/CRD