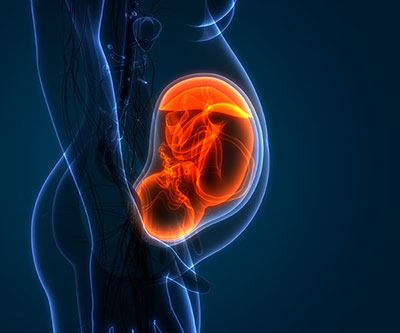 Stock image of a developing fetus.

A fetus develops and grows in the womb for nearly 10 months, but the environment in which this occurs can set the stage for a person’s future health. For example, a baby’s birthweight can have long-term consequences—low birthweight affects survival during the newborn period, and high birthweight can elevate a person’s future risk for cardiovascular and metabolic diseases. This concept of “fetal programming” is not new, but scientists are still uncovering precisely how this happens.

In a study led by Fasil Tekola-Ayele, Ph.D., an Earl Stadtman Investigator in the Epidemiology Branch, researchers identified candidate genes that regulate birthweight via epigenetic and transcriptomic mechanisms in the human placenta. The team integrated genetic variants associated with birthweight in genome-wide association studies (GWAS) with placental methylation and gene expression information. Their analyses identify functional gene pathways in an important organ that is often excluded from tissue-specific gene expression resources.