Mapping the Role of RHOA in Vascular Development 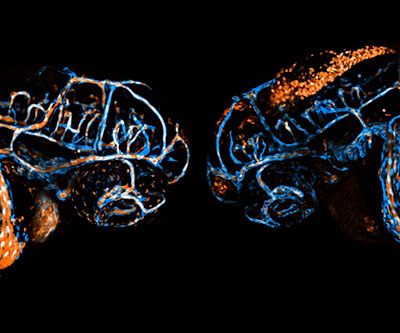 The protein RHOA is a master regulator of processes essential for development. However, its specific roles in vascular development—the formation of blood vessels—and the function of endothelial cells, which line blood vessels, are not clear. Endothelial cells are particularly important because they serve as a protective barrier for blood vessels and help regulate the exchange of oxygen, solutes, nutrients, and immune cells between the blood and tissues. Disruptions in the integrity of this layer can cause inflammation, stroke, and even death, when it occurs in the brain.

To better understand the role of RHOA in vascular development, researchers in the Weinstein Lab used zebrafish as a model. Their study incorporated a variety of genetic and pharmacologic tools to map out the detailed role of RHOA. Zebrafish with mutations in the rhoaa gene had distinct defects in the vascular integrity and patterning of blood vessels in the brain. Different mutations impaired the ability of endothelial cells to activate downstream signals, such as ROCK1 and ROCK2, which affected the integrity of blood vessels in the brain by weakening cellular connections and causing hemorrhage. The study team also showed that too much or too little RHOA activity causes vascular dysfunction.

Overall, the findings document specific roles for RHOA in the formation and maturation of blood vessels and the integrity of the endothelial layer.