The research in the Section on Molecular Morphogenesis focuses on the understanding of the molecular mechanism by which thyroid hormone (TH) regulates postembryonic development in vertebrates. The main model is the metamorphosis in Xenopus laevis and tropicalis, two highly related anuran species. Amphibian metamorphosis resembles the perinatal period in mammals when plasma TH concentrations are also high. The control of this developmental process by TH (Fig. 1) offers a unique paradigm in which to study genes that are important for postembryonic organ development. During metamorphosis, different organs undergo vastly different changes. Some, like the tail, undergoes complete resorption, while others, such as the limb, are developed de novo. Most of the larval organs persist through metamorphosis but are dramatically remodeled to function in a frog. For example, tadpole intestine in Xenopus laevis is a simple tubular structure consisting of primarily a single layer of larval epithelial cells. During metamorphosis, it is transformed into a multiply folded adult epithelium with elaborate connective tissue and muscles through specific cell death and selective cell proliferation and differentiation.

TH and metamorphosis: Thyroid hormone controls the transformation of the tadpole to frog.

The wealth of knowledge from past research and the ability to manipulate amphibian metamorphosis both in vivo and in vitro in organ culture offer an excellent opportunity to 1) study the developmental function of thyroid hormone receptors (TRs) and the underlying mechanisms in vivo and 2) identify and functionally characterize genes which are critical for postembryonic organ development in vertebrates, particularly, the formation of the adult organ-specific stem cells, during postembryonic development in vertebrates. 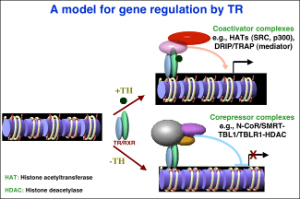 In the first area, we have demonstrated earlier in a reconstituted oocyte system and in developing embryos that heterodimers between TR and RXR (9-cis retinoic acid receptor) can function within a chromatin context to repress or activate gene expression in the absence or presence of TH, respectively (Fig. 2). Our studies have also revealed a role of chromatin disruption and histone modification in transcriptional regulation by TR/RXR. These have led us to hypothesize that TRs have dual functions during frog development. They activate gene expression during metamorphosis when TH is present. In premetamorphic tadpoles, they repress gene expression to prevent metamorphosis, thus ensuring a tadpole growth period. 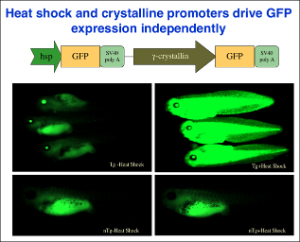 Our studies since have provided strong support and mechanistic insights for such a model. First, chromatin immunoprecipitation (ChIP) assay shows for the first time that TR/RXR are bound to thyroid hormone response elements (TREs) in the target genes in premetamorphic tadpoles. In support of a role of histone acetylation in gene regulation by TR/RXR, blocking deacetylase function with the drug trichostatin A (TSA) can activate TH response genes in the intestine of premetamorphic tadpoles, similar to TH.  Furthermore, treatment of premetamorphic tadpoles with TH leads to increased histone acetylation at the TRE regions as the target genes are being activated. In addition, TH treatment causes a reduction in the association of corepressors with and an increase in the recruitment of coactivators to TH response genes, accompanied by the removal of about two nucleosomes from the TR bound region and changes in histone modifications, in agreement with our earlier studies in reconstituted oocyte system. To directly investigate the roles and mechanisms of TR function in development, we have employed transgenic and gene editing technologies to analyze TR function directly during metamorphosis.  We have developed a double promoter construct approach (Fig. 3), where the gama-crystalline gene promoter drives the expression of GFP marker gene in the eyes of transgenic animals and another promoter drives the expression of the desired transgene. This allows us to rear and treat wild type and transgenic animals together throughout experiments and later easily identify transgenic animals by examining their eyes under a fluorescent microscope. Using such an approach, we have shown that over-expressing a dominant negative (dn) TR under the constitutive CMV promoter had no effect on tadpole development but inhibited TH-induced metamorphosis by inhibiting TH-response gene regulation through competition for target gene binding against endogenous TRs (Fig. 4). Since the dnTR does not bind TH, this leads to the retention of corepressors at the target genes even when TH is present, thereby repressing TH-inducible genes.  More recently, we have shown overexpression of a dominant negative coactivator (dnSRC3) also inhibits both TH-induced as well as natural metamorphosis (Fig. 5), demonstrating a critical role of coactivators in gene activation and metamorphosis in vivo. By using transgenesis to conditionally expression a dominant positive TR that constitutively activate TH-inducible genes without binding to TH, we have also shown that TR is sufficient to mediate metamorphic effect of TH, even though TH is known to have non-genomic effects through other binding proteins. Finally, we have generated X. tropicalis animals lacking any functional TRα and observed that TRα knockout animals are surprisingly able to complete metamorphosis at a similar age as the wild typing siblings. Carefully analyses during development, however, have revealed multiple roles of TRa during Xenopus development, including preventing precocious initiation of metamorphosis when TH is absent, regulating the rate of metamorphic progression, and coordinating temporal regulation of metamorphosis in different tissues/organs. 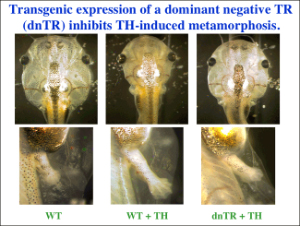 In the near future, we will further analyze the role of endogenous TRs during frog development. We will generate TRb knockout and TR double knockout animals and study their development and carry out global RNA sequencing (RNA-seq) and chromatin immunoprecipitation (ChIP)-sequencing (ChIP-seq) on wild type and TR-knockout animal tissues to determine the molecular pathways regulated by different TRs in different tissues during metamorphosis.  In additional, we will investigate how TH receptors (TRs) recruit different cofactors to regulate gene transcriptions and metamorphosis and investigate the roles of the cofactors during development, particularly in stem cell development and adult tissue morphogenesis (see the second area below). Here we will focus on the function of endogenous TR-interacting cofactors by using knockout approaches and genome-wide association studies of TR and cofactors to TR target genes. Although potential transcription mechanisms for TR can be obtained from in vitro and/or tissue culture cell studies, whether such mechanisms are utilized in vivo in vertebrate development, especially in divergent developmental processes, can only be obtained from an in vivo development model. 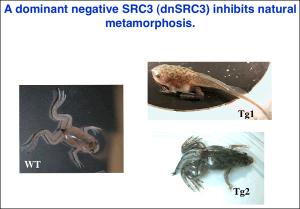 In the second area, we have been focusing how TH-induced genes function in the development of adult intestinal stem cells during metamorphosis. Adult stem cells are essential for the development of adult organs and tissue repair and regeneration. The intestine is an excellent organ for studying adult stem cells as the intestinal epithelium, the tissue responsible for the food processing and nutrient absorption, is continuously renewed through stem cell division followed by cell differentiation and eventual death of the differentiated cells throughout adult life in vertebrate. Importantly, the structure and function of the intestine is highly conserved among vertebrates. Intestinal remodeling offers a unique opportunity to study adult stem cell development and proliferation. First, it has a simple organization and its metamorphic transformations have been well characterized. The intestine in an herbivorous tadpole is very long but structurally simple, consisting of predominantly a single layer of epithelial cells. During metamorphosis, the larval epithelial cells undergo degeneration through programmed cell death or apoptosis. Concurrently, cells of the adult epithelium, connective tissue, and muscles, proliferate. Eventually, the adult cells differentiate to form a multi-folded epithelium surrounded by elaborate connective tissue and muscles, thus producing an organ resembling mammalian adult intestine. Second, it has been well documented that the ECM (extracellular matrix) that separates the epithelium from the connective tissue, i.e., the basal lamina, undergoes drastic remodeling during metamorphosis, suggesting that cell-cell and cell-ECM interactions play a role in the development of the adult tissues.  Third, we and others have shown that intestinal remodeling can be reproduced in organ cultures or even in primary cell cultures by simply adding physiological concentrations of TH to the medium of tadpole organ/cell cultures, making it easy to manipulate this process. Finally, there are no identifiable stem cells for the adult intestinal epithelium in premetamorphic tadpoles and thus intestinal metamorphosis offers an opportunity to study the development of adult stem cells.

Making use of these properties, especially, the ability to use transgenic tadpole intestine in recombinant organ culture studies, we have shown that the adult epithelial stem cells are derived from the larval/tadpole epithelium, likely through TH-induced dedifferentiation. On the other hand, the exact origin for the adult stem cells remains to be determined due to the presence of multiple cell types in the larval epithelium. Furthermore, we have also shown that TH is able to induce the formation of progenitor cells tissue-autonomously in the larval epithelium. However, TH action in the rest of the intestine, most likely the connective tissue, is also required for such cells to develop into true adult stem cells (Fig. 6). Such findings suggest that TH action outside the epithelium is required for the formation of the proper stem cell niche during metamorphosis. 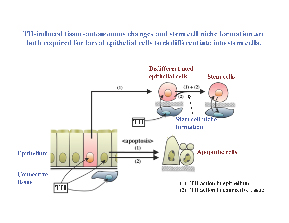 Our more recent and ongoing studies have been focused on the role several TH-induced genes in stem cell development by using gene editing technologies to knockout the genes. Our main objective for the next few years is to determine the mechanisms underlying the formation and proliferation of the adult stem cells, especially the epithelial-autonomous formation of the progenitor cells and the nature of the stem cell niche. We will further complement our studies by investigating the genes found to be important for frog intestinal stem cell development in developing mouse intestine by making use of the ability to carry out conditional knockout analysis. Given the fact that the formation of the adult organs during amphibian metamorphosis mimics that during postembryonic development in mammals and the poor understanding of the development of adult organ-specific stem cells in human, the knowledge gained from our studies should help to find ways to prevent and/or reverse developmental defects in human and to improve the development of stem cell-based therapies, e.g., better controlling the differentiation of iPS cells for in vitro organ development.