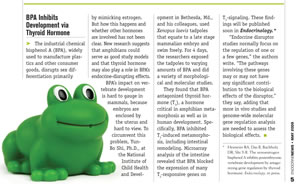 The industrial chemical bisphenol A (BPA), widely used to manufacture plastics and other consumer goods, disrupts sex differentiation primarily by mimicking estrogen. But how this happens and whether hormones are involved has not been clear. New research suggests that amphibians could serve as good study models and that thyroid homrmone may also play a role in BPA's endocrine-disrupting effects.

BPA's impact on vertebrate development is hard to gauge in mammals, because embryos are enclosed by the uterus and hard to view. To circumvent this problem, Yun-Bo Shi, Ph.D., at the National Institute of Child Health and Human Development in Bethesda, Md., and his colleagues, used Xenopus laevis tadpoles that equate to a late stage mammalian embryo and swim freely. For 4 days, the researchers exposed the tadpoles to varying amounts of BPA and did a variety of morphological and molecular studies.

They found that BPA antagoniezd thyroid hormoe (T3), a hormone critical in amphibian metamorphosis as well as in human development. Specifically, BPA inhibited T3-induced metamorphosis, including intestinal remodeling. Microarray analysis of the intestine revealed that BPA blocked teh expression of many T3-responsive genes on T3-signaling. These findings will be published soon in Endocrinology.*

"Endocrine disruptor studies normally focus on the regulation of one or a few genes," the authors write. "The pathways involving these genes may or may not have any significant contribution to the biological effects of the disruptor," they say, adding that more in vivo studies and genome-wide molecular gene regulation analysis are needed to assess the biological effects.