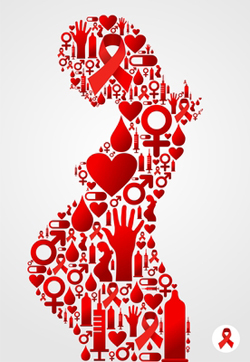 According to the World Health Organization (WHO), more than 34 million people around the world are living with HIV, and about 10% of them are children. On World AIDS Day, the NICHD reflects on its progress and its continuing efforts to keep these children healthy, to preserve the health of HIV-positive mothers, and to prevent new cases of HIV among children and adults.

HIV/AIDS research has been a major area of NICHD interest since the epidemic began in the 1980s. This sustained effort has contributed to a number of significant successes. For example: 20 years ago, HIV-positive mothers faced a 25% chance that they would pass the virus on to their children; today, treatments are available that not only help to keep mothers healthy, but also reduce the risk of transmission to their children to less than 1% in the United States. Fewer than 100 babies are born with HIV in the United States, according to the Centers for Disease Control and Prevention (CDC), a dramatic decrease resulting from focused research efforts.

Dr. Lynne Mofenson, chief of the Maternal and Pediatric Infectious Disease Branch (MPIDB) (formerly the Pediatric, Adolescent, and Maternal AIDS Branch), is a leader in the Institute's research efforts that have contributed to these dramatic successes. For her achievements, she was recently honored with the 2012 Federal Employee of the Year Medal

. For details on the award and Dr. Mofenson's career, read the NICHD news release: NICHD's Mofenson recognized as Federal Employee of the Year.

This World AIDS Day, the NICHD is working toward meeting WHO goals that are a natural extension of Dr. Mofenson's work: halting and reversing the spread of HIV/AIDS by 2015 and ensuring universal access to HIV/AIDS treatments, especially among mothers and children. Despite the successes and progress in developed nations, according to the United Nations (UN), about one-half of HIV-positive pregnant women in low- and middle-income countries do not receive anti-retroviral treatment that can keep them healthy and their babies HIV-free. Governments and organizations around the world are working together to reach this benchmark and other UN Millennium Development Goals, which seek to improve health and quality of life around the world by 2015. Read more about the Millennium Development Goals

To celebrate World AIDS Day, the DHHS Office of Global Affairs invited Dr. Mofenson to present about Elimination of Mother to Child Transmission of HIV: Challenges and Opportunitieson November 19 in Washington, D.C. Her presentation described the latest scientific developments in HIV/AIDS and how these advances will shape health policy and help the world reach the Millennium Goals. Dr. Mofenson concluded by saying that, based on these achievements, there is much optimism that the world community can watch the birth of an AIDS-free generation by 2015. You can view the slides from Dr. Mofenson's talk (PDF - 5.05 MB) for more information.

Other NICHD Activities in HIV/AIDS Research

Reducing mother-to-child transmission of HIV and preserving the health of mothers are two areas of ongoing NICHD-supported research related to HIV/AIDS.  The Institute's work using anti-HIV drugs to prevent mother-to-child transmission is an application of an idea now known as "treatment-as-prevention," which is being tested as part of a more comprehensive prevention strategy in many populations. For example, the Adolescent Medicine Trials Network for HIV/AIDS Interventions (ATN), co-funded by the MPID Branch, is conducting research on the use of anti-HIV drugs among youth who are HIV-negative, but at-risk. The goal of this research is to find out whether these drugs can keep the virus from taking hold in the body if the youth is exposed to HIV.

In fact, the NICHD is interested in all aspects of HIV/AIDS among adolescents and young adults. According to the CDC, there are more than 68,000 teens and young adults with HIV in the United States. More than 2,000 young people became infected this year, but others have grown up with the infection and face unique developmental challenges due to lifelong treatment with anti-HIV drugs. To help protect uninfected youth from contracting HIV/AIDS and to improve the health of HIV-infected youth, both the MPID Branch and the Population Dynamics Branch (PDB) (formerly the Demographic and Behavioral Sciences Branch) support research on HIV infection in adolescents. The PDB focuses on the behavioral aspects of HIV risk and prevention, while the MPID Branch supports research on a variety of topics, including studies on the prevention, treatment, and control of HIV among young people.

For additional information on other Institute research on HIV/AIDS, check out the previous NICHD Spotlights on HIV/AIDS below.

For more information on HIV/AIDS research at the NICHD, select one of the following links: