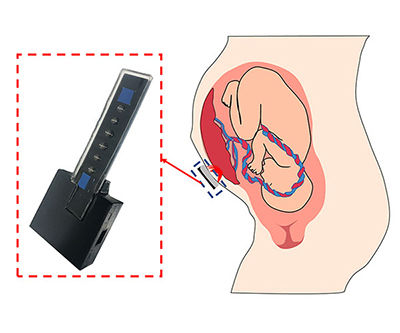 The prototype oxygen sensor next to a diagram of a fetus with forward-facing placenta.
Credit: Thien Nguyen, Ph.D., NICHD

The placenta plays critical roles in fetal development, pregnancy outcomes, and lifelong health. Problems with the placenta can result in conditions like preeclampsia, gestational diabetes, prematurity, and stillbirth. They also can be a marker of later disease for mother and child. A non-invasive, easy-to-use method to monitor the oxygen level of the placenta during pregnancy would be a useful tool for assessing maternal and fetal health.

that potentially could diagnose pregnancy complications by monitoring placental oxygen levels. The device sends near-infrared light through the pregnant person’s abdomen to measure oxygen levels in the arterial and venous network in the placenta.

Of the 12 women in the study, five experienced a pregnancy complication, including hypertension, a short cervix, and polyhydramnios (excess amniotic fluid). On average, the women with complications had a placental oxygen level of 69.6%, a difference statistically significant from the 75.3% seen in the healthy pregnancies in the study.

While further study is needed before the device could be used routinely, the results mark a first step toward continuously monitoring placental oxygen levels to assess maternal and fetal health.