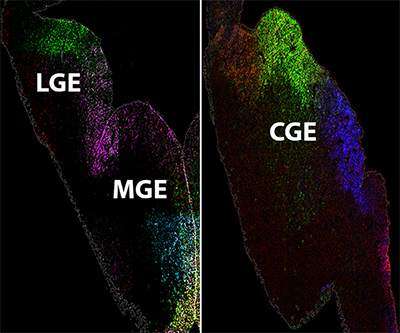 Inhibitory GABAergic interneurons are an extremely diverse cell population. Abnormal development and function of these cells have been linked to numerous brain diseases, including epilepsy, schizophrenia, and autism. However, scientists lack a comprehensive understanding of the mechanisms that regulate interneuron fate and maturation during fetal development. Interneurons arise from the ganglionic eminences in the embryonic brain, specifically from areas known as the ventricular zone (VZ) and subventricular zone (SVZ).

The Petros Lab and colleagues used single-cell sequencing to characterize gene expression patterns—the degree to which specific genes are turned “on” or “off”—within VZ and SVZ cells of the mouse brain. They observed substantial genetic diversity both between and within ganglionic eminences and verified many of these gene expression patterns in brain sections. By revealing previously unknown spatial and temporal genetic diversity in VZ and SVZ cells, the results improve understanding of the process by which different neuronal subtypes are formed during embryonic brain development.