Understanding Synaptic Regulation in the Hippocampus 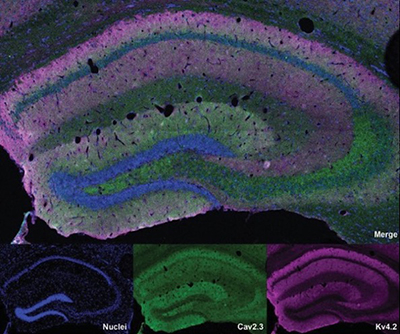 Neurons in the brain communicate using chemical messengers called neurotransmitters, as well as electrochemical signals from various types of charged ions, including calcium and potassium. Connections between neurons, called synapses, serve as hubs for transmitting and regulating this information.

The hippocampus is found deep inside the brain, and it is important for memory and learning. The hippocampus, like other parts of the brain, can adjust its activity and structure in response to changes—a capacity called neural plasticity. Understanding how brain plasticity is regulated helps researchers understand what is necessary for typical neurodevelopment, as well as identify effective therapies for neurodegenerative diseases or injury.

For example, a potassium current, commonly called IA, is important for integrating and regulating synaptic signals in the hippocampus. Dysregulation of IA has been reported in human cases of Alzheimer’s disease, epilepsy, autism, and fragile X syndrome.

Researchers from the Hoffman Lab identified a new complex at synapses, formed by two ion channel subunits, one that is permeable to calcium (Cav2.3) and one that mediates IA (Kv4.2). They found that Cav2.3 physical and functional coupling to Kv4.2 plays a fundamental role in the hippocampus by regulating the magnitude of IA. The lab’s study was designed to confirm and define the nature of the channel, which they had identified in a previous screen, and to assess its functional role in hippocampal pyramidal neurons.

The researchers showed that Cav2.3 and Kv4.2 voltage-gated ion channel subunits form a protein complex in the rodent hippocampus, and that these complexes are found in the dendrites and spines of CA1 pyramidal neurons. They also demonstrated that Cav2.3 promotes surface expression of Kv4.2 in CA1 pyramidal neurons to limit the magnitude of postsynaptic responses and attenuate IA-mediated spontaneous synaptic currents.