An Aspirin a Day for Preeclampsia Prevention 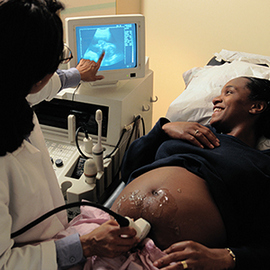 Aspirin is generally not recommended during pregnancy, as it can lead to bleeding problems for both mother and baby. But for some women, the benefits of a daily low-dose aspirin after the first trimester may outweigh the risk.

Results from multiple clinical trials showed that using low-dose aspirin lowered the risk of preeclampsia in pregnant women at high risk for the condition (PMID: 24711050). Preeclampsia happens when a woman's blood pressure suddenly gets too high during pregnancy. If preeclampsia occurs during pregnancy, the only current cure is delivery of the fetus, often prematurely. In fact, preeclampsia is responsible for 15% of preterm births in the United States.

The clinical trials also found that low-dose aspirin reduced the risk for premature delivery and low birth weight of infants. Based on these findings, the U.S. Preventive Services Task Force (USPSTF) issued a recommendation

that women at high risk for preeclampsia take a daily low-dose aspirin after 12 weeks of pregnancy to help prevent the condition from developing. The USPSTF recommendation mirrored the 2013 guidelines

from the American College of Obstetricians and Gynecologists. Select a link below to learn more.

Preeclampsia affects 3% to 5% of pregnancies in the United States each year and is a leading cause of maternal and neonatal morbidity/mortality. Women may be at higher risk for preeclampsia if they:

However, it can be difficult to predict if a woman will develop preeclampsia. Pregnant women with normal blood pressure at 20 weeks of pregnancy can suddenly develop the symptoms, which include high blood pressure, increased swelling, and protein in the urine. Much of the time, preeclampsia has no visible symptoms.

For this reason, it is important for all pregnant women to get regular prenatal care. This will allow their health care provider to monitor their health closely and determine if a daily aspirin is needed.

The NICHD has supported research on preeclampsia for decades. Scientists seek to understand the causes of preeclampsia and how best to prevent and treat the condition. Some of the current research led and supported by the NICHD on preeclampsia includes, but is not limited to, the following:

These are just a few of the Institute's ongoing projects related to preeclampsia. Read more about NICHD research on preeclampsia.