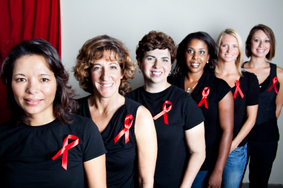 HIV/AIDS continues to be a serious public health concern. According to the Centers for Disease Control and Prevention (CDC), more than 290,000 women were living with HIV in the United States in 2008.

March 10 marks National Women and Girls HIV/AIDS Awareness Day, an event sponsored by the U.S. Department of Health and Human Services' Office on Women's Health (OWH) to raise awareness about HIV/AIDS in women and girls. This year, the OWH has teamed up with the Greater than AIDS

campaign to encourage women and girls to answer the question: "What's your deciding moment?" Deciding moments are everyday opportunities to take action against HIV/AIDS. A deciding moment could be getting tested for HIV, speaking with friends and family about HIV/AIDS, taking proactive steps to prevent the spread of HIV, and using HIV/AIDS medications as directed.

Understanding, preventing, and treating HIV/AIDS in women and girls is an important aspect of the NICHD's research portfolio. NICHD-supported research has shown that although many symptoms of the disease are similar for men and women, women face additional health problems from HIV/AIDS that men do not, such as pelvic inflammatory disease and other related infections. Prevention and treatment of HIV/AIDS in pregnant women add another dimension to the Institute's portfolio—one that is unique to the NICHD.

As the nation commemorates National Women and Girls HIV/AIDS Awareness Day, the NICHD highlights some recent findings from its research on HIV/AIDS in women and girls.

The NICHD provides co-funding to the National Institute of Allergy and Infectious Diseases (NIAID) to partner in conducting the Women's Interagency HIV Study (WIHS), the largest and longest ongoing study of HIV-infected women in the United States. WIHS data provide a great deal of information about how HIV and its treatment affect women uniquely. For instance, recent studies have demonstrated that:

As the HIV-infected population ages, the interactions among aging, menopause, and HIV infection on complications such as diabetes, osteoporosis, and heart disease are being evaluated by NICHD's scientists. For example, this research has shown that:

Follow-up evaluation of HIV-infected and demographically similar HIV-uninfected women in the WIHS is ongoing. These findings will provide a better understanding of the effects of HIV and its treatment across the lifespan, as well as the impact of risk factors, such as obesity and smoking, on women and the course of their HIV/AIDS.

Approximately one-third to one-half of new HIV infections in the United States occur in adolescents and young adults, defined as people roughly 12 to 24 years old. Additionally, nearly two-thirds of HIV-infected youth are unaware that they are infected, which contributes to the continued spread of HIV infection among this age group in particular.

The NICHD-funded Adolescent Medicine Trials Network for HIV/AIDS Interventions (ATN), which is co-funded by the National Institute of Mental Health (NIMH) and the National Institute of Drug Abuse (NIDA), is the only national research network devoted to the health and well-being of people in this age group who are HIV-infected or at risk of HIV infection. The results of several important studies conducted through the ATN are directly relevant to the health of young HIV-infected female adolescents and young adults. For example:

Several NICHD-supported research efforts focus on ways to prevent transmission of HIV to women and girls. One ongoing study, Vaginal and Oral Interventions to Control the Epidemic (VOICE)

, is evaluating the use of a combination oral antiretroviral drug therapy for preventing HIV transmission in women who are uninfected with HIV, but who are at risk for infection.

, funded primarily by NIAID with co-funding from the NICHD and the NIMH. The NICHD's funds for the MTN are specifically to support studies of HIV prevention in pregnant women and adolescent girls.

A separate MTN study will evaluate the efficacy of another antiretroviral agent, dapivarine, which is formulated in a vaginal ring for prevention of HIV infection in women. Information about the effectiveness of these interventions is critical to empowering women to protect themselves from HIV transmission.

In an MTN study to prevent HIV transmission in pregnant women, use of a tenofovir vaginal gel at delivery in uninfected pregnant women showed that a very small amount of the drug was absorbed from the vagina into the maternal bloodstream, and even less of the drug was passed to the infant before delivery. An ongoing study is evaluating the safety and absorption of tenofovir vaginal gel when it is used for one week during late pregnancy.

The MTN, in collaboration with the NICHD-led ATN, recently completed a study of the safety, adherence, acceptability, and effect on vaginal microflora of a novel anti-HIV product, Vivagel®, when used by adolescent girls. The study revealed that the compound was generally well tolerated and comparable with the placebo, but was associated with higher incidence of low-grade related genital adverse events.

Behavior-Based HIV Prevention and Support in Women and Adolescent Girls

NICHD's research on HIV/AIDS prevention goes beyond drug therapies to study the various behaviors that place women and girls at high risk or low risk for HIV transmission. For instance, NICHD funded a study to evaluate the benefits of an intervention program that encouraged orphan adolescent girls to stay enrolled in school as a strategy for HIV prevention. The study showed evidence of the potential success of supportive intervention for HIV prevention and demonstrated how novel and targeted strategies might be beneficial for certain age groups.

strives to understand the factors that influence health and health-related behaviors among adolescents and young adults, including sexual activity and sexually transmitted disease (STD) prevention. Add Health research has revealed ways to prevent the spread of STDs, including HIV/AIDS, using methods that reduce risky behaviors.

The NICHD also supports studies of HIV/AIDS and risk behaviors among women, and of how these may be influenced during clinical trials. Studies have shown, for example, that women in HIV prevention trials have common misconceptions about preventive gels, believing that simply participating in the trial and using the gel can help them avoid HIV infection. A concern is that these and other misconceptions about a clinical trial could lead to riskier behaviors, either among the study participants themselves or their partners, which could place participants at an increased risk for infection.

Also of interest to the NICHD are the attitudes that influence sexual behaviors of adolescents and young adults who are at risk for HIV infection. In an NICHD-supported study, adolescents and young adults (ages 15 to 25) showed widespread uncertainty about their HIV status. Those that were uncertain about their HIV status expressed desires to accelerate their childbearing relative to their counterparts who were certain that they were not infected. (Source: Trinitapoli, J., & Yeatman, S. (2011). Uncertainty and fertility in a generalized AIDS epidemic. American Sociological Review, 76(6) 935–954.)

In 2009, the NICHD initiated funding for studies addressing the desire to have children and HIV risk. These studies, which are currently underway, are examining the fertility desires of couples in which both partners are HIV positive or HIV negative, or one partner is HIV positive and the other is HIV negative. The couples in these studies are from different geographical regions, including the United States, Kenya, Malawi, Mozambique, Nigeria, and Zambia, allowing comparisons across regions.

The NICHD also supports the counseling and care of HIV-infected adolescents and young adults through the ATN in partnership with the CDC and local health departments. The Strategic Multisite Initiative for the Identification, Linkage and Engagement in Care of Youth with Undiagnosed HIV Infection (SMILE in CARING for YOUTH) Program is a new program funded by the ATN. The program links existing ATN research and treatment with HIV counseling and testing programs funded by the CDC to local health departments that reach out to potentially HIV-infected adolescents and young adults. This ATN/CDC collaboration seeks to enhance methods of linking youth with treatment and encouraging them to continue receiving care for HIV and co-occurring conditions.

The NICHD's efforts related to understanding, preventing, and treating HIV/AIDS in women and girls continues even after the National Awareness Day ends. The research described above is just a small portion of the Institute's overall research portfolio on HIV/AIDS.

For more information on HIV/AIDS research and the NICHD, select one of the following links: