What are the parts of the nervous system? 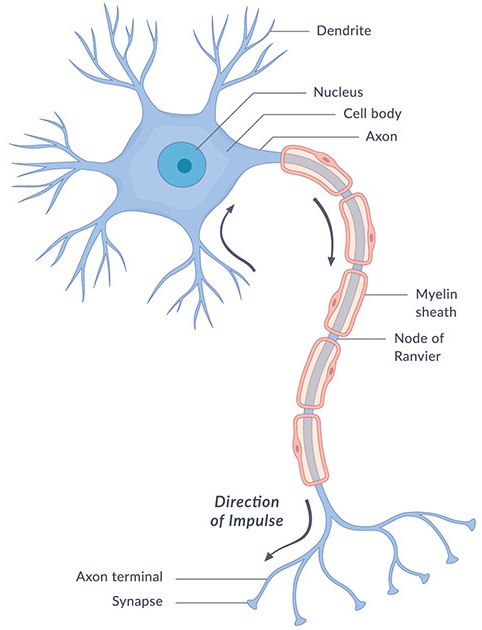 The nervous system transmits signals between the brain and the rest of the body, including internal organs. In this way, the nervous system’s activity controls the ability to move, breathe, see, think, and more.1

The basic unit of the nervous system is a nerve cell, or neuron. The human brain contains about 100 billion neurons. A neuron has a cell body, which includes the cell nucleus, and special extensions called axons (pronounced AK-sonz) and dendrites (pronounced DEN-drahytz). Bundles of axons, called nerves, are found throughout the body. Axons and dendrites allow neurons to communicate, even across long distances.

Different types of neurons control or perform different activities. For instance, motor neurons transmit messages from the brain to the muscles to generate movement. Sensory neurons detect light, sound, odor, taste, pressure, and heat and send messages about those things to the brain. Other parts of the nervous system control involuntary processes. These include keeping a regular heartbeat, releasing hormones like adrenaline, opening the pupil in response to light, and regulating the digestive system.

The brain is made up of many networks of communicating neurons and glia. These networks allow different parts of the brain to “talk” to each other and work together to control body functions, emotions, thinking, behavior, and other activities.1,2,3