Sorting and Processing of Prohormones in the Regulated Secretory Pathway

Endocrine and neuroendocrine cells synthesize prohormones and proneuropeptides, which are sorted into, and proteolytically processed in the granules of the regulated secretory pathway. The processed bioactive peptides are stored in the granules until the cell receives an external stimulus that triggers their release. This is in contrast to the constitutive secretory pathway that secretes other proteins in an unregulated manner.

Sorting of prohormones to the regulated secretory pathway 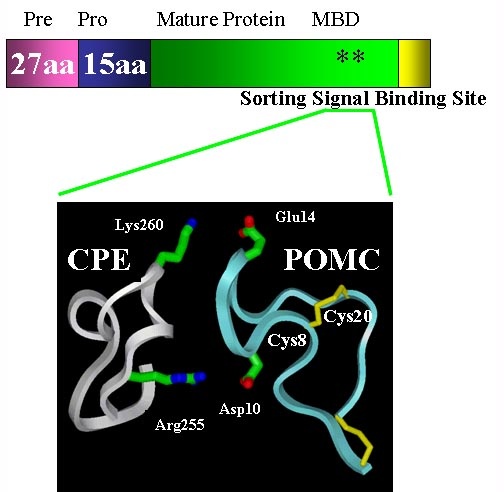 We have used pro-opiomelanocortin (POMC), as our model prohormone to investigate the mechanism by which endocrine and neuroendocrine cells sort cargo to the regulated secretory pathway (RSP). Our studies show that the amino-terminal domain of POMC contains a loop structure required for the sorting of POMC to the RSP. This structure is not involved in the aggregation of POMC to form multimers, or to another prohormone, proenkephalin, indicating that aggregation alone is insufficient to effect sorting of POMC to the RSP. We now have structural data from NMR that has identified a potential motif consisting of two acidic and two hydrophobic residues within the N-terminal domain of POMC. These residues are highly conserved across species. Site-directed mutagenesis studies have confirmed the importance of these specific residues in the sorting of POMC to the RSP in PC12 cells. This motif in POMC specifically binds to a sorting receptor, the membrane form of carboxypeptidase E (CPE), to effect sorting of POMC to the RSP. Our NMR data also provided information about the molecular nature of the putative binding site on CPE. Thus by molecular modeling we were able to identify a region encompassing Arg255 and Lys260 on CPE as the sorting signal binding site. The sorting signal motif in POMC potentially represents a general consensus motif that is present also in other prohormones such as proinsulin, brain derived neurotrophic factor (BDNF), and proenkephalin . The techniques we use include transfection of wild type and mutant forms of prohormones into endocrine or neuroendocrine cells and following the path through which they get secreted, either via the constitutive or the regulated secretory pathway. Our main assays are immunofluorescent microscopy, pulse-chase radiolabeling, radio-immuno assays and western blots.

We have recently been able to use knowledge gained from the identification of sorting signals and applied it to a form of gene therapy necessitating the diversion of prohormones to the constitutive pathway in the salivary gland.