Carboxypeptidase E is a Sorting Receptor for the Regulated Secretory Pathway

The membrane-bound form of Carboxypeptidase E (CPE) was identified as a sorting receptor for the regulated secretory pathway through studies carried out in our lab. We have generated a molecular model of CPE, and structural alignment with other carboxypeptidases revealed a putative sorting signal binding domain that is independent of the enzymatic site. In order to study the sorting signal binding site, we generated a number of mutant forms of CPE and expressed them in insect Sf9 cells using a baculovirus vector. We developed a binding assay using the membranes from infected cells expressing CPE, and were able to map a sorting signal binding site in CPE. Two basic amino acid residues, Arg255 and Lys260, were found to be critical for binding to the acidic amino acids on the sorting signal of pro-opiomelanocortin (POMC), p roinsulin and brain derived neurotrophic factor (BDNF). In the anterior loop of pituitary and neurons derived from CPE knock out mice, the regulated secretion of BDNF was impaired. 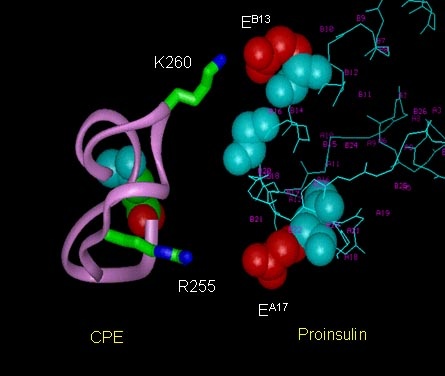