AIDS Awareness Month and the NICHD 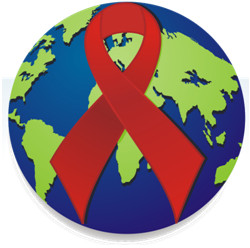 This December, the NICHD joins the international community in recognizing the 21st annual AIDS Awareness Month. Research by the NICHD, several partner Institutes at NIH, and other organizations has helped change the outlook for those with HIV/AIDS in the United States and abroad. While it is good to reflect on how far we’ve come, the NICHD keeps its focus on the many challenges that remain for the future.

The NICHD began its focused efforts against HIV/AIDS in 1988 with the establishment of its Pediatric, Adolescent, and Maternal AIDS (PAMA) Branch. The PAMA Branch supports and conducts domestic and international research into all aspects of HIV/AIDS and its complications in infants, children, and adolescents, as well as in pregnant women, mothers, and women of childbearing age. Since then, the PAMA Branch, other NICHD components, and other organizations have learned a great deal about the prevention and treatment of HIV/AIDS. Notably, as a result of the NICHD’s efforts in collaboration with other Institutes and organizations, transmission of HIV from infected mothers to fetuses and newborns has dropped from about 25 percent to less than 2 percent in the United States.

Today, multiple NICHD components, including the Endocrinology, Nutrition, and Growth (ENG) Branch and the Demographic and Behavioral Sciences (DBS) Branch, join the PAMA Branch in studying various aspects of HIV/AIDS. For a description of some of these efforts, select a link below:

With the introduction of highly active antiretroviral therapy (HAART) and other treatments during the last two decades, people with HIV/AIDS in the United States are living longer. Findings reported in 2003 from the Women’s Interagency HIV Study

—the largest and longest study of women with HIV in the United States—demonstrated that most HIV-positive women are living longer on HAART. The study, co-funded by the NICHD, National Institute of Allergy and Infectious Diseases (NIAID), and other Institutes, also showed that non-AIDS conditions have replaced AIDS as the major cause of death among HIV-infected women in the United States. Another study, co-funded by the NICHD and NIAID, recently released findings that most HIV-positive children now reach adulthood. In the United States and in other countries where effective drugs are widely available, HIV/AIDS has become a more manageable, chronic condition rather than an acute disease that is always life-threatening.

However, as studies have shown, HIV-positive women who do not develop AIDS are still at high risk for chronic health problems, such as low bone mineral density to diabetes. Preliminary data from the recently released study suggest the same way may be true of HIV-positive children. Studies conducted through clinical trial networks supported by the NICHD and other Institutes will continue to provide information that enables better care for those living with HIV infection and its consequences.

The NICHD has long led research on these co-occurring infections. Through the PAMA Branch, the Institute supports multiple ongoing and planned studies of tuberculosis or malaria co-infection in HIV-positive children and pregnant women worldwide. The clinical trials networks funded by the NICHD and other NIH Institutes also provide a unique, ready forum for studying the safety and effectiveness of vaccines in HIV-positive children, youth, and pregnant women; current network efforts include studies of HIV and vaccines for H1N1 flu, human papillomavirus, meningitis, and rotavirus.

Many children of HIV-positive mothers now grow up HIV-negative, but these children have been exposed to powerful drugs in the womb and/or in infancy. The benefit to children from taking these drugs—and thereby avoiding HIV infection—is significant, but there may be poorly understood long-term risks associated with their use. What might the long-term effects of these exposures be as these children grow and develop? The NICHD and several partner Institutes support the Pediatric HIV/AIDS Cohort Study (PHACS)

to provide the framework for research to answer this question. Within PHACS, the Surveillance Monitoring for Antiretroviral Treatment Toxicity (SMARTT) Study

is following such children in the United States to detect treatment-related health problems which might emerge as they grow. Similarly, the Latin American NICHD International Site Development Initiative (NISDI) seeks to understand how such exposures influence children’s health by following the development of thousands of children both in the United States and internationally.

Although highly effective drugs are available for managing HIV disease, adolescents living with HIV face special challenges; adherence may be more difficult for some adolescents than it is for adults. Several studies in the Adolescent Trials Network for HIV/AIDS Interventions (ATN)

are looking for ways to simplify treatment regimens or to help adolescents to keep on their medication schedules.

Research findings have prevented HIV transmission to hundreds of thousands of infants and children. The Women and Infants Transmission Study was initially co-funded by the NICHD, NIAID, and the National Institute on Drug Abuse in 1988 and is now in its final analysis phase. This study has uncovered many factors—among them, high maternal virus level—which affect transmission. Efforts to modify these factors to reduce mother-to-fetus and mother-to-infant transmission have been highly successful in the United States.

In some developing countries where HIV transmission is more prevalent, NICHD research focuses on reducing transmission from infected mothers to their infants via breastmilk. Although breastfeeding provides optimal nutrition and is associated with reduced chances for infant disease and death—especially in resource-poor countries where infant formula, or even clean water, are not available—it is also associated with higher risk of HIV transmission. Recent studies in Zambia and Malawi, co-funded by the NICHD and other partners, seek to balance the importance of breastmilk (even from HIV-positive mothers) to infants’ health with reducing the risk for transmission. More information about the findings from these studies is available through this Web site.

In addition, the NICHD’s Endocrinology, Nutrition, and Growth (ENG) Branch is looking at breastfeeding among HIV-infected mothers and their infants in terms of overall nutrition in resource-limited settings. ENG Branch-supported research determined that treating expressed breastmilk with heat maintains the milk’s nutritive content, while reducing the chance of HIV transmission. Other research supported by the ENG Branch is looking into the effects of nutrition and malnutrition on HIV disease, its progression, and its treatment.

Decreases in HIV transmission and AIDS deaths have not occurred uniformly or globally. New infections are surging among teens and young people both in the United States and worldwide. In the United States, one-half of all new infections occur in people younger than age 24 years, mostly among heterosexual women and girls. In developing countries, young women face even higher risk for contracting HIV—they become infected up to six times as often as young men in those areas.

(mentioned earlier) is examining behavior change initiatives and the development of anti-HIV microbicides. Also, the NICHD, the ATN, and the Centers for Disease Control and Prevention are working to identify undiagnosed American teens with HIV and link them to care through the Strategic Multisite Initiative for the Identification, Linkage and Engagement in Care of Youth with Undiagnosed HIV Infection.

In addition, the NICHD’s Demographic and Behavioral Sciences (DBS) Branch supports studies of interventions to reduce risk behaviors related to HIV infection and of societal patterns related to HIV/AIDS transmission and infection. For example, the Branch supports studies on the demographic and socioeconomic characteristics of areas in which HIV transmission is high. More information about the DBS Branch’s efforts on HIV/AIDS is available through the Branch’s Web site.

The NICHD’s efforts from the last three decades, combined with the work and support of NIAID, the World Health Organization, and hundreds of other agencies, groups, and organizations, have changed the impact of HIV and AIDS. This year’s AIDS Awareness Month reminds us of our remarkable progress during the last two decades as well as the important work which remains in HIV/AIDS prevention and treatment.

For more information about the NICHD’s work in HIV/AIDS, select a link below: