U.S. Secretary of State Hillary Rodham Clinton's visit to NIH gives Institute a chance to reflect on advances in prevention and treatment of virus among infants, women, and children 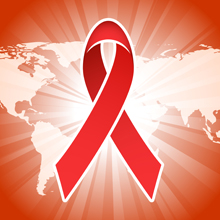 The NICHD continues to advance understanding of the effects of HIV/AIDS on infants, children, young people, women, and families. Findings from research supported by the NICHD often inform recommendations that guide treatment and care worldwide. NICHD-funded studies also advance innovative ideas for preventing infection. The commemoration of World AIDS Day

is a timely opportunity for the Institute to reflect on the most recent discoveries and to look to the future.

HIV/AIDS research is backed by an alliance of government partnerships and support. On November 8, 2011, U.S. Secretary of State Hillary Rodham Clinton highlighted the power of this alliance in her remarks at the NIH about Creating an AIDS-free Generation. Secretary Clinton said that in an "AIDS-free generation":

NICHD-sponsored research focused on infants, children, adolescents, and women has had a direct impact on these goals.

According to the Joint United Nations Programme on HIV/AIDS (UNAIDS)

Currently supported NICHD research seeks ways to reduce mother-to-child transmission during pregnancy, birth, and breastfeeding even further, as well as ways to treat HIV-infected children and adolescents, both domestically and internationally. Some recent advances in NICHD-funded research on HIV/AIDS are highlighted in the sections below.

Research shows that a mother who is infected with HIV can transmit it to her infant through breastfeeding. In the United States, where there is access to clean water and infant formula is safe, HIV-infected mothers are counseled not to breastfeed. But in resource-limited countries, this approach is neither safe nor feasible for most HIV-infected women because of cost, unsafe water supply, and low cultural acceptance of formula feeding. In addition, infants who are not breastfed miss out on the essential nutrition and immunologic defenses in breast milk that are important to an infant's overall health. HIV-infected mothers in these settings often face a difficult choice—to breastfeed and risk transmitting HIV to their infant, or to not breastfeed and risk their infant dying of other infectious diseases or malnutrition.

As recently noted, NICHD research has helped to define the importance of breastfeeding to infant survival, even for infants born to mothers with HIV. It has also helped identify interventions that allow safer breastfeeding by HIV-infected mothers in low-resource settings. Previous NICHD-sponsored research demonstrated that giving anti-HIV drugs to a breastfeeding infant or an HIV-infected breastfeeding mother significantly lowered the risk of transmitting HIV through breast milk. Recently described follow-up research demonstrated that longer drug regimens for infants being breastfed by HIV-infected mothers reduced the risk for acquiring HIV by 50 percent. This research was conducted in collaboration with the National Institute of Allergy and Infectious Diseases (NIAID) through the HIV Prevention Trials Network.

Even in formula-fed populations, the risk of mother-to-child transmission is particularly high when women are not diagnosed with HIV until delivery. In these cases, the pregnant mother does not receive antiretroviral drugs to prevent transmission. As reported earlier this year, NICHD research found that adding one or two drugs to the standard 6-week AZT treatment for infants of women who took no antiretroviral drugs during pregnancy reduced the risk of mother-to-child HIV transmission by more than 50 percent. Related findings from another study, recently highlighted by the NICHD, showed that HIV transmission rates to infants vary depending on when mothers became HIV infected. These findings emphasize that preventing HIV infection during pregnancy is crucial for preventing new HIV infections in children.

Researchers are also studying interventions to optimize the health of HIV-infected women and their infants, including infants who do not contract HIV. The NICHD/NIAID-funded study, Promoting Maternal-Infant Survival Everywhere—or PROMISE—aims to determine how best to reduce the risk of HIV transmission during pregnancy and breastfeeding, and how to optimally preserve the health of these children and their mothers. Visit The PROMISE of Research formore details about the study.

Treatment of infants who have contracted HIV from their mother during pregnancy, birth, or breastfeeding is an important focus of current research by the NICHD. The International Maternal, Pediatric, and Adolescent AIDS Clinical Trials (IMPAACT) Group is a network of research institutions, funded through an NICHD-NIAID-National Institute of Mental Health (NIMH) partnership, that conducts trials in collaboration with the NICHD Domestic and International Pediatric/Perinatal HIV Clinical Studies Network (also called the NICHD Network). Prior NICHD-supported research showed that infants who were infected despite receiving the anti-HIV drug nevirapine may have a form of HIV that is resistant to nevirapine, the most commonly used drug for treating pediatric HIV in resource-limited countries.

The NICHD reported on one of its IMPAACT Group studies demonstrating that initial therapy with a three-drug regimen, including a protease inhibitor called lopinavir/ritonavir, was more effective than a three-drug regimen containing nevirapine for treating  infants who became infected despite being exposed to nevirapine at birth. These findings led to changes in the World Health Organization (WHO) treatment guidelines, Use of Antiretroviral Drugs for Treating Pregnant Women and Preventing HIV Infection in Infants

More recently, the IMPAACT group reported that a protease-inhibitor lopinavir/ritonavir-based therapy was more effective for treating HIV-infected infants than was nevirapine-based therapy even when the infected child had not been exposed to nevirapine at birth.

Side Effects of Anti-HIV Drug Therapies in Children

Anti-HIV drug treatment in children is life-saving, yet it also carries risks and side effects. Recently reported findings from a study co-funded by NICHD showed that high cholesterol levels (also called hypercholesterolemia) from HIV therapy in infected children did not return to normal and remained elevated at follow-up examinations two years later. Findings reported from a subsequent study showed that HIV-infected toddlers getting the same anti-HIV treatment also had cholesterol levels that were higher than non-infected children.

Understanding the long-term effects of HIV infection and the side effects of prolonged anti-HIV treatment in children and young people is a key aspect of NICHD research. The Institute is funding the Pediatric HIV/AIDS Cohort Study to evaluate these types of issues. Research to develop interventions to reduce these types of risks is also ongoing.

HIV in Adolescents and Young Adults

Approximately one-third to one-half of new HIV infections in the United States occur in adolescents and young adults, defined as people roughly 12 to 24 years old, and almost two-thirds of HIV-infected youth are unaware they are infected. The NICHD's Adolescent Medicine Trials Network for HIV/AIDS Interventions (ATN) is the only national research network devoted to the health and well-being of people in this age group who are HIV-infected or at risk of HIV infection.

The Institute recently described the full implementation of a program that was established as an initial pilot study in 2009 to link the existing ATN research and treatment network with HIV counseling and testing programs funded by the Centers for Disease Control and Prevention (CDC) that reach out to potentially HIV-infected adolescents and young adults. This new ATN/CDC collaboration seeks to enhance methods of linking youth with treatment and encouraging them to continue to receive care for HIV and co-occurring conditions.

strives to understand the factors that influence health and health-related behaviors, including sexual activity and sexually transmitted disease (STD) prevention, among adolescents and young adults. This research has revealed ways to prevent the spread of STDs, including HIV/AIDS, using methods that reduce risky behaviors. Other NICHD-supported international research aims to evaluate a range of incentives that help young women stay in school and that help them avoid risky behaviors to pay school fees.

The NICHD funds and conducts research on many STDs, including HIV/AIDS, and the unique ways in which these diseases affect women. Within this context, the Institute co-funds the Women's Interagency HIV Study (WIHS), the largest and longest ongoing study of HIV-infected women. WIHS data provide a great deal of information about STDs and the nature of risky sexual behaviors in this population.

Prevention of HIV transmission to women is also an important focus for NICHD research. One ongoing study, Vaginal and Oral Interventions to Control the Epidemic (VOICE)

, conducted by the Microbicide Trials Network

—a partnership of the NICHD, NIAID, and NIMH—is evaluating the use of an anti-HIV drug formulated as a vaginal gel, compared to an oral antiretroviral drug (tenofovir alone) and a combination oral antiretroviral drug (tenofovir plus emtricitabine) for preventing HIV transmission in women who are uninfected with HIV, but who are at risk for infection. Researchers recently stopped the vaginal gel arm and the tenofovir-only drug arm after finding the treatments were not working. Information about the effectiveness of these types of interventions is critical to empowering women in the fight against HIV transmission.

The Institute also supports research on interventions intended to increase couples' communication about mutual protection from HIV risk, multiple studies of how women and couples weigh decisions about childbearing and avoiding HIV infection, and research in South Africa and Malawi on how HIV affects the health and well-being of infected individuals and their families.

As HIV and AIDS continue to challenge the global (international and domestic) community, they create additional hardship in areas with limited resources, in the United States as well as low- and middle-income countries in Africa, Asia, and the Americas, where disease prevalence remains highest. Conditions of food insecurity, malnutrition, poor sanitation, and chronic exposure to other infections (including malaria) can increase the difficulty and scope of the issue. Women and children continue to bear the greatest burden.

Within this context, the NICHD—with support from NIH Office of AIDS Research (OAR) and in partnership with the WHO Department of Nutrition for Health and Development (NHD)—has played a leadership role both in sponsoring research on the role of food and nutrition in the course and treatment of HIV/AIDS and in translating resulting evidence into new programs and guidelines issued by the WHO and implemented through programs such as President's Emergency Plan for AIDS Relief (PEPFAR).

and, more recently, in guidelines for the nutritional care of HIV-infected infants and children younger than age 14 years published by the WHO in 2009

. In preparing to revise the 2003 recommendations, the partners are now reviewing the state of the science and progress made in HIV, AIDS, and nutrition to identify outstanding or additional issues that need to be addressed. This review activity is also critical to developing guidelines for the nutritional care of HIV-infected adolescents (those older than age 14 years) and adults, including pregnant and lactating women. As part of this effort, the NICHD, again with support from OAR, held a state of the science workshop in July 2010. Proceedings from this workshop were recently published as a supplement to the American Journal of Clinical Nutrition

. An executive summary the meeting is also available in the Journal.

In her November speech at the NIH, Secretary Clinton also introduced a partnership between the PEPFAR and UNAIDS

to launch a global plan for eliminating new HIV infections among children by 2015.

PEPFAR's efforts have successfully helped to prevent HIV transmission and, as pointed out by Secretary Clinton, helped to prevent the transmission of HIV to 114,000 infants in 2010 alone. The partnership with UNAIDS will further bolster PEPFAR's ability to prevent HIV transmission to children. Secretary Clinton noted that PEPFAR has already granted more than $50 million to several academic institutions to develop rigorous studies for testing prevention strategies. She further noted that, through PEPFAR, the United States would provide an additional $60 million to enhance combination prevention methods in four countries in Sub-Saharan Africa. NIH-funded research provides the scientific basis for these prevention strategies.

PEPFAR's work in collaboration with NIH will be further highlighted when U.S. Department of State Global AIDS Coordinator for the United States, Dr. Eric Goosby presents the 2011 David E. Barmes Global Health Lecture at the NIH on December 13, 2011. His lecture is titled PEPFAR: Moving from Science to Program to Save Lives. Visit http://www.fic.nih.gov/news/events/Pages/barmes-lecture.aspx for more information, or http://videocast.nih.gov/summary.asp?live=10715 to watch a videocast of the event.

, which will be held in Washington, D.C., in July 2012. The meeting's theme, Turning the Tide Together

For more information on HIV/AIDS and the NICHD, select one of the following links: