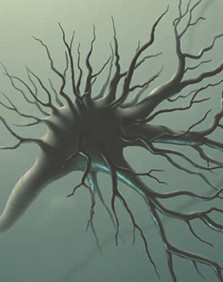 On November 14, 2011, NICHD Director Alan Guttmacher, M.D., joined several other NIH Institute Directors in discussing NIH neuroscience research during the annual meeting of the Society for Neuroscience in Washington, D.C. Dr. Guttmacher highlighted some of the exciting neuroscience findings that NICHD researchers presented at the meeting.

In the early developing embryo, the human brain starts as a hollow tube of cells known as the neural tube. The neural crest, on the upper surface of this tube, gives rise to multiple cell types that eventually form parts of the skull and face, melanin/pigment-producing cells in the skin, and the autonomic nervous system (ANS), which controls automatic body functions, such as heart rate and breathing. How these cells move from the neural crest to their specific body destinations influences how the nervous system develops. Problems in this movement can result in birth defects that affect the structure of head and face, the cardiovascular system, and parts of the ANS.

NICHD grantee Paul Kulesa and colleagues at the Stowers Institute for Medical Research in Kansas City, Mo., the California Institute of Technology in Pasadena, and Montana State University in Bozeman, have developed a system for observing the movement of neural crest cells in chicken embryos. The researchers, funded through the NICHD's Developmental Biology, Genetics, and Teratology Branch, found that cells destined for different locations or structures move along separate pathways to reach their final destinations. The areas between the pathways seem to prevent cells in one path from intermixing with cells from another path to ensure all cells reach their precise final targets. The researchers believe that the cells receive chemical "signals" that direct them to move as a cluster to their final location. As the spinal cord matures, it forms connections linking it to the clusters of neural crest cells, which then grow into major parts of the ANS.

This knowledge could enable researchers to understand and possibly prevent some birth defects that affect the face and skull as well as disorders of the ANS, such as congenital central hypoventilation syndrome, a rare condition in which newborns stop breathing during sleep. The research may also contribute to advances in understanding the skin cancer, melanoma, and the nervous system cancer, neuroblastoma, which begin in cells that arise from the neural crest.

You can read the research abstract for Dr. Kulesa's finding on the Society for Neuroscience Web site

Mapping How Cells Reorganize Connections to Other Cells

The brain of a developing fetus generates billions of nerve cells during gestation. These cells transmit nerve signals across the brain using a structure called a synapse, the gap between nerve cells where signals "leap" from one cell to the next. Throughout life, the brain reorganizes existing synapses and creates new synapses every day. Events and conditions such as seizure, stroke, traumatic brain injury (TBI), or neurodegenerative disease can damage brain tissue and weaken synapses.

Jonathan Cohen, Ph.D., and R. Douglas Fields, Ph.D., in the Section on Nervous System Development and Plasticity of the NICHD's Division of Intramural Research (DIR), discovered a molecule that seems to interrupt the brain's formation of new synapses under certain conditions. When brain tissue is damaged, surviving brain cells may start signaling or firing uncontrollably. When neurons are overstimulated in this way, Drs. Cohen and Fields determined that a specific type of microRNA (miRNA)—called miR-485—not only interrupts the production of proteins that would form new synapses, but also weakens existing synapses.

Understanding how miR-485 works could shed light on how signals in a developing fetal brain control the formation of connections between nerve cells. This knowledge could also aid in developing drugs to block miR-485, which could help restore synaptic connections in brain tissue damaged by injury or disease.

You can read the research abstract for Drs. Cohen's and Fields' finding on the Society for Neuroscience Web site

Measuring Speed on the Brain's Superhighway

Within the nervous system, axons (long extensions on nerve cells) join to create networks that serve as the brain's "information superhighway."  Previous research has shown that axons with larger diameters conduct nerve impulses more rapidly than those with smaller diameters. Measuring the diameter of an axon lets researchers know the speed at which signals travel along it.

Peter Basser, Ph.D., Michal Komlosh, Ph.D., and Evren Özarslan, in the Section on Tissue Biophysics and Biomimetics within the NICHD's DIR, have developed a new, more sensitive technique that allows them to examine the structure of bundles of axons as well as the diameter of single axons. These researchers have measured axons that are only a few microns in diameter. (A micron is 1,000 times smaller than a millimeter.) The technology, which uses magnetic resonance imaging (MRI), is called double-pulsed field-gradient MRI. In addition, this technique allows researchers to look inside the brain without performing surgery.

One promising application of this new technology could be the ability to detect subtle structural changes in axons following mild TBI, such as a concussion, that are undetectable with other imaging techniques. This approach might also be useful in assessing future therapies for TBI and other conditions that affect neural networks. The technology may also allow researchers to investigate how axon structure changes as the brain develops.

Many people are familiar with the concept of doing something out of habit. But for some individuals, such as those with autism, obsessive compulsive disorder (OCD), or Tourette's syndrome, habitual behaviors can become overly repetitive, even fixations. NICHD grantee Ann Graybiel, Ph.D., at the Massachusetts Institute of Technology, has focused her research on a set of key structures deep within the brain that are involved with learning, movement, and the formation of repetitive, automatic, and habitual behaviors.

Dr. Graybiel's research, funded through the NICHD's Child Development and Behavior Branch, has examined the role of a protein that is especially common in a structure of the brain known as the striatum. The protein comes in two forms, called CalDAG-GEFI and CalDAG-GEFII. In animal studies, Dr. Graybiel has shown that disabling the CalDAG-GEFI form of the protein, while also chemically stimulating the striatum, leads to an increase in repetitive behavior, such as compulsive grooming.

Her work has also involved research on a drug used to treat Parkinson's disease, called levodopa. This research has shown that levodopa alleviates the symptoms of Parkinson's for a time, but then results in excessive, repeated involuntary movements, such as grimacing, repeated blinking, or tremors in the hands or limbs. The researchers found that the levodopa stimulated the production of CalDAG-GEFII in the striatum, which coincided with the animals' repeated involuntary movements.

Understanding the functioning of CalDAG-GEFI and CalDAG-GEFII and their interactions with other molecules could greatly contribute to understanding such disorders as autism, Tourette's, OCD, and Parkinson's. It could also expand possible targets for treating the repetitive symptoms associated with these conditions.

You can read the research abstract for Dr. Grayniel's finding on the Society for Neuroscience Web site

For more information on NICHD's neuroscience research, select one of the links below: