Taking a Stand Against Bullying 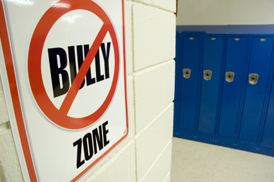 As agencies, schools, organizations, and communities work together to take a stand against bullying, they are finding that this seemingly simple problem is actually very complex. For example, new research published in the Journal of Adolescent Health found that those bullied electronically—sometimes called cyber bullying, such as by computer or cell phone—are at high risk for depression .

Research also shows that bullying victims are more likely to:

Statistics from a 2007 survey suggest that bullying continues to have far-reaching impacts: nearly 1 out of 3 students in middle school and high school said they had been bullied at school during the 2007 school year. Among high school students, 1 out of 9—about 2.8 million teens—reported that they had been pushed, shoved, tripped, or spit on during the last school year, while another 1.5 million reported being threatened with physical harm. In the same survey, 900,000 high schoolers reported being cyberbullied—a newer twist on this age-old problem.

Cyber bullying, also called "electronic aggression," has also increased with the rise in use of the Internet, e-mail, mobile devices, and social media sites. Unlike more traditional bullying, cyber bullying can be more anonymous and nearly constant. When checking e-mail, checking Facebook or other social network site, or even using a mobile phone, day or night, a person can be cyber bullied.

In August 2010, policy makers, researchers, educators, corporate leaders, and others met in Washington, D.C., for the first-ever Federal Partners in Bullying Prevention Summit, hosted by the U.S. Department of Education. Summit sponsors and participants, including researchers from and supported by the NICHD, pledged their commitment to working together to draft a national strategy to reduce and stop bullying. In his opening remarks, Secretary of Education Arne Duncan made clear that dealing with bullying—and the related issues of ensuring students feel safe and have a school free of disruption—is fundamental to education.

"Bullying is very much an education priority that goes to the heart of school performance and school culture," he said. "Schools can have an enormous impact on reducing bullying. Ideally, all schools should have a code of conduct that sends a message to the students, staff, and community that it has high expectations for them and little tolerance for cruelty and disrespect."

Summit participants agreed to increased coordination among agencies, increased research to better understand bullying and solutions for preventing bullying, and increased funding for anti-bullying programs and support, especially for schools with the greatest needs.

For its part, the NICHD supports and conducts research related to bullying and its effects. As mentioned, the findings from a recent NICHD study from the Prevention Research Branch of the Division of Epidemiology, Statistics, and Prevention Research showed that depression was high among victims of cyber bullying and identified other characteristics of those who are bullied and those who bully. Other NICHD-funded research showed that bullying is not an isolated behavior, but that it often leads to other, more violent behaviors for both the bully and the victim. Research also showed that the bully-victim—a person who is bullied and who also bullies—is at high risk for depression and other health and emotional problems.

The Institute also supports and has supported a number of projects related to bullying through its Social and Affective Disorder/Child Maltreatment and Violence Program in the Child Development and Behavior Branch. Some of these include:

In addition, Dr. Valerie Maholmes, director of the Social and Affective Disorder/Child Maltreatment and Violence Program, serves on the Federal Partners in Bullying Prevention Steering Committee, an interagency effort that was launched in early 2010 to focus on the problem of bullying. The Steering Committee helped to plan the Federal Partners in Bullying Prevention Summit and will continue to work with summit participants to coordinate and continue government efforts to end bullying.

Bullying can have serious short- and long-term effects on children, adolescents, and even adults. The NICHD is committed to putting an end to bullying by collaborating with other agencies, organizations, schools, to understand the causes, effects, and possible ways to prevent bullying.