NICHD Studies May Help Women, With Their Doctors, Reduce Risk of Diabetes During Pregnancy 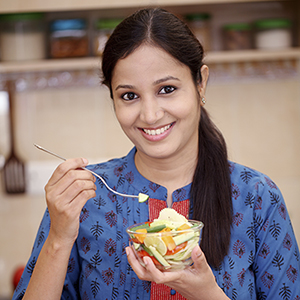 A series of studies by an NICHD researcher suggests that women who maintain a healthy diet and exercise before they become pregnant are less likely to develop gestational diabetes mellitus, a type of diabetes that occurs only in pregnant women.

While the studies do not establish a cause-and-effect relationship, they do show strong associations between certain types of foods and the likelihood of developing gestational diabetes during pregnancy. The information could help women of childbearing age and their doctors plan a diet that reduces gestational diabetes risk.

Cuilin Zhang, M.D., Ph.D., M.P.H., an investigator in the Epidemiology Branch within the NICHD Division of Intramural Population Health Research, studied the diets of a group of women before they became pregnant and then followed them during their pregnancies to track the incidence of gestational diabetes. Here are some of the key findings from her research:

NICHD researchers will continue to investigate gestational diabetes, seeking strategies to prevent the disease, to help improve outcomes for mothers and their babies.

For more information about gestational diabetes, select one of the following links: