NICHD’s Population Dynamics Branch supports research on a range of topics, including the factors that make populations rise and fall, such as fertility and mortality. We checked in with branch chief Rebecca Clark to learn more about the branch’s work. Here’s what she had to say:

What is population dynamics research, and how can it help improve health? 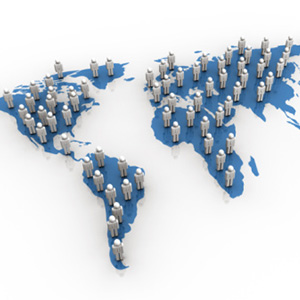 Population dynamics research encompasses demography, research on health and productivity at the population level, and social and behavioral research on reproductive health.

Demography is the scientific study of human populations, including fertility, mortality and morbidity, migration, population distribution, marriage and family, population growth and decline, and the causes and consequences of demographic change.

Population scientists can identify major health issues by looking at trends and patterns in births and deaths for the population overall. For instance, are fertility rates rising, falling, or stable, and how do they differ for different subgroups of the population—by income groups, by age groups, by racial and ethnic groups? If you want to reduce the number of unintended pregnancies, you need to know how big the problem actually is and which groups are having the biggest problems.

As another example, population scientists look at mortality at the population level and over the age span—at what ages do people die and by what causes? How do those things differ by population subgroups? These statistics are essential in identifying population-level health problems and the subpopulations that would benefit most from interventions.

Population dynamics research also gives insight into why the health of the population is changing. The racial and ethnic composition of today’s U.S. population differs dramatically from the U.S. population in 1960. We are older on average, far more ethnically and racially diverse, and, while education levels are rising, disparities are increasing on many socioeconomic measures. These changes have a major impact on the overall health of the nation.

Research on reproductive health improves health by developing and testing social and behavioral interventions that reduce the transmission of sexually transmitted diseases, including HIV/AIDS, and improve access to and use of appropriate medical services. Researchers in this area also examine the causes and consequences of unintended pregnancy. In the United States right now, more than half of all pregnancies are unintended, either unwanted or mistimed.1 But almost all unintended pregnancies occur because family planning methods are not used at all or are not used correctly and consistently. The research we support addresses why people do not use effective family planning methods and develops interventions to reduce unintended pregnancies.

What kinds of techniques are used in population dynamics research?

Most population dynamics research applies statistical analysis to population-representative data, often collected at multiple levels, from the genome to the social and physical environment. This type of research in large part depends on the collection of huge data sets by one team of researchers, which are then analyzed by researchers across the country and, often, around the world, using very sophisticated methods.

By “population representative,” I mean that the data are collected in such a way that the results you get from analyzing your sample will be generalizable, or applicable, to the population overall. If you want to know what is going on with the health and well-being of teenagers in the United States, for instance, you can get only so far by collecting data from the three high schools that are closest to the researchers’ university offices. You get better information if you do what the Add Health study did—starting with 80 high schools that were representative of U.S. schools with respect to region of country; whether the area was rural, urban, or suburban; and the size, type, and ethnicity of their student bodies.

In many cases, these data are longitudinal, so researchers can analyze how early life circumstances, experiences, and exposures affect health in later life. Examples of data collection projects we support are Add Health (National Longitudinal Study of Adolescent to Adult Health

, the Panel Study of Income Dynamics

Child Development Survey, and the National Longitudinal Survey of Youth

What are some of the most surprising findings that have come out of your branch’s research programs in the last five years?

There are so many I could include, but here are just a few:

Moving from poor neighborhoods to better ones as a child improves the mental health of girls but not boys during adolescence.2

Opening or expanding a casino on tribal lands is associated with lower risk of obesity and overweight and decreased poverty rates among school-aged Native American children.3

Increased paternal age at childbearing is associated with increased risk of some psychiatric disorders such as autism, psychosis, and bipolar disorders in offspring.6

Providing vouchers to mothers in public housing in poor neighborhoods so that they can move to low-poverty areas results in, 14 years later, those mothers having better physical and mental health and subjective well-being and lower incidence of obesity and diabetes compared with control groups.7

Pregnant women who are assaulted by an intimate partner are at increased risk of giving birth to infants of reduced weight.8

Lower birth weight and less breastfeeding are linked to adult inflammation and disease.

Spouses tend to be more genetically similar than two individuals chosen at random.

Looking ahead, what new research directions are you most excited about for the branch and for population research in general?

There are several research directions I find especially promising:

Research that combines inputs to health at multiple levels, from genetics to individual, family, neighborhood factors, and beyond, may yield important information.

I suspect that many of the causes of later disease and disability are from early life, from pregnancy through young adulthood. A related area is looking at how health is transmitted intergenerationally—how the health of your grandmother, and maybe even your grandfather—affects the health of your children.

We have supported research in Mexico

that shows that an intervention involving giving conditional cash transfers to mothers for getting their children regular medical visits and vaccinations reduces infant and child mortality, improves growth, and generally improves the health and well-being of the children. Other research has shown that improving educational achievement is associated with dramatically improved health for the individual

, and, in some circumstances, for the individual’s children.

What advice do you have for students or trainees interested in a future career in population dynamics research?

Take a lot of math and statistics. And in statistics, focus on statistical training such as econometrics that teaches you how to collect and analyze population-representative samples so that your research findings are applicable to whatever population you are interested in. Behavioral research based on convenience samples—volunteers or people who attend a certain clinic, university, or youth center—is often limited because the types of people who volunteer to be in research studies (or go to a single clinic) may not have a whole lot in common with the general population.

Get grounding in human biology and genetics. The interactions among genetics, experiences, and environmental exposures have huge promise for explaining differential risk for health and disease and positive and negative health behaviors.

Learn spatial methods such as geographic information systems and the associated statistics.

Read scientific research from outside your field. For instance, at least skim the contents of every issue of Science and Nature. Many scientific advances emerge from the intersection of two or more scientific perspectives. Also, reading what other disciplines are doing in the subject matter you are working in will keep you from inventing a wheel that has already been rolling around successfully for a couple of decades.