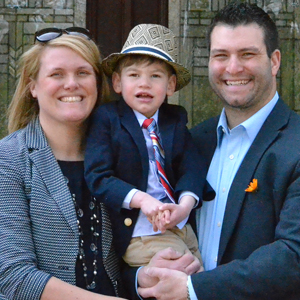 Betsy Pilon’s pregnancy was textbook perfect until, at 35 weeks, her doctor told her that her son Max was breech. Then, at 37 weeks, she no longer felt him move. Tests showed that Max’s heartbeat was strong but not varying—a sign that Max was not getting enough oxygen. Betsy had an immediate C-section.

What Betsy and her husband, Michael, learned was that Max had neonatal hypoxic-ischemic encephalopathy (HIE). HIE occurs when an infant’s brain does not get enough oxygen or blood before, during, or just after birth.

Max was transferred immediately to a nearby hospital that specializes in high-tech intensive care for a therapy to cool his body in an effort to limit brain damage. Cooling slows the brain metabolism and has been shown to protect from cell death by decreasing substances that contribute to cell injury.

Max lay on a cooling blanket for 72 hours. “We were so scared, but cooling therapy saved Max’s life,” said Betsy. Less than 3 weeks after he was born, Max went home with his parents.

HIE is a rare but life-threatening condition that often causes severe disability in surviving infants. Oxygen deprivation can occur if the umbilical cord is wrapped around the fetus or if the fetus does not get enough blood because of a tear in the placenta or the womb. HIE occurs in about 1.5 of every 1,000 live births.1

A little more than a decade ago, infants born with HIE had little hope. More than 60% of infants with severe HIE died; nearly all of those who survived past the first few days had severe disabilities.

In 2005, an NICHD-led study tested the effectiveness of a cooling therapy (also called therapeutic hypothermia) in which infants’ body temperature is lowered by about 6 degrees Fahrenheit shortly after birth. The study found that cooling therapy beginning at 6 hours of age and conducted for 3 days significantly reduced the number of deaths and disabilities in infants with moderate to severe HIE. Follow-up studies showed that the benefits of cooling therapy continued into childhood.

Since then, cooling therapy has become standard practice for infants with HIE at specialized intensive care nurseries and has been called one of the major success stories in neonatology of the past 25 years.

Despite the success of cooling therapy, it does not help all children with HIE. NICHD continues to support research in an effort to improve cooling therapy, expand the group of infants who can benefit from this kind of treatment, or identify new therapies for infants after HIE.

evaluated whether reducing the temperature further or extending the time of therapy would help, but the researchers found that changing the standard practice did not further improve infants’ survival.

NICHD researchers are now seeking to help those infants with HIE who may not reach hospitals in time for cooling therapy or who do not show symptoms right away. Researchers are studying whether giving cooling therapy to infants between 6 and 24 hours of age for 96 hours will improve survival or reduce disability at 18 to 24 months. The study has completed enrollment, and results are anticipated in 2016.

Another study is focusing on preterm infants with HIE born at 33 to 35 weeks of gestation. Past studies have looked at infants born at 36 weeks or later.

Hope for Infants with HIE

Shortly after Max’s birth, Betsy went online looking for information to help her understand her son’s condition. Fortunately, she found and connected with families who blogged about the joys and challenges of raising children with HIE.

In 2014, Betsy and other parents of children with HIE created Hope for HIE

to help other families dealing with the condition. Hope for HIE leads education and awareness efforts and offers support for grieving parents.

Today, Max is walking—a major feat for him. At age 1, he was diagnosed with spastic diplegia, a form of cerebral palsy that primarily affects the legs.

“Cooling therapy is fantastic, and it saved my son’s life, but it’s not a cure,” said Betsy. “Hope for HIE helps families like ours understand the different outcomes and challenges after HIE. We also want to connect families with research studies to help find answers and improve care for infants with HIE.”