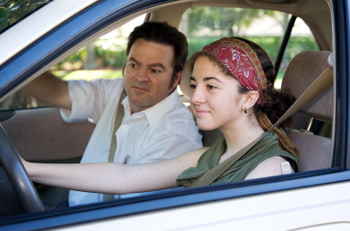 Car accidents are the leading cause of death and disability for adolescents. As they shift from learning to drive in classrooms and parking lots to real on-road driving situations, they encounter shifts in weather, traffic, and road conditions, as well as potential distractions.

Today's drivers encounter many possible distractions—from radios to cell phones to other passengers. Research shows that driver inattention is the primary cause of motor vehicle crashes, and that distracting tasks (such as texting) frequently cause drivers' focus to stray from the road. Reducing these distractions—especially cell phone use—is the primary message of the government agencies and other organizations that take part in Distracted Driver Awareness Month.

Because many of these situations are new to them, including how to handle distractions while driving, teen drivers are more vulnerable to accidents and injuries than are drivers at any other age. As part of its commitment to adolescent health and safety, the NICHD supports and conducts research into understanding young drivers' behavior and of ways to reduce risky driving behaviors and minimize distractions while driving.

The NICHD studies described below demonstrate a range of approaches to identifying risk factors for crashes, examining behavior and safety, and evaluating driver education and licensing programs that differ from state to state. Select a link to learn more.

According to the Insurance Institute for Highway Safety, 16-year-olds have higher crash rates than drivers of any other age, and crash rates among teens are the highest of any age group. Understanding what makes teen drivers more vulnerable could lead to ways to reduce their risk. Researchers in the NICHD Division of Epidemiology, Statistics, & Prevention Research (DESPR) have conducted a number of studies about crash risks and risk behaviors among teen drivers. In the Naturalistic Teenage Driving Study they equipped the vehicles of 42 newly licensed Virginia drivers with recording systems to collect data during an 18-month period. These data were used to examine how conditions affected risky driving patterns as well as the likelihood of crashes.

Researchers examined data from the 42 monitored cars to determine how elevated gravitational- or "g-force" events—such as hard braking or fast acceleration―affect crash and near-crash rates among adolescents and their parents. Investigators found that adolescents were four times as likely to crash or nearly crash their cars as were the adult drivers. Teenagers' risky driving rates were five times as high as those of adults in the study. In addition, the teen crash rate declined throughout the 18-month study period, but rose slightly during the final quarter of the study. For more on this finding, visit http://www.ncbi.nlm.nih.gov/pubmed/22021319.

The researchers found that the presence of an adult passenger reduced teenage driver car crashes and near crashes by 75%. Among teens, risky driving―identified by elevated g-force events―decreased in the presence of an adult or teenage passenger, at night, and late at night. However, the researchers found that when a teen driver had risk-taking friends, risky driving and crash or near crash rates increased by 96%. Visit http://www.ncbi.nlm.nih.gov/pubmed/22098768 or listen to an audio briefing at http://www.nichd.nih.gov/news/releases/Pages/102111-teen-driving-accidents.aspx to learn more about these findings.

NICHD researchers also analyzed data from the U.S. National Household Travel Survey to determine some of the characteristics and risk factors involved with fatal teen car accidents. By examining driver sex and passenger sex and age, the researchers made some surprising discoveries. They found that young male drivers whose passengers were 16 to 20 years old had the highest risk level for fatal crash involvement. The relative risk when passengers were 21 to 34 years old was also high, particularly when both passenger and driver were male. For more on this finding, visit PMID 20159095 or http://www.nichd.nih.gov/news/releases/Pages/teen_passengers.aspx.

Other NICHD-funded research studies have examined and compared risky driving behaviors of teen girls and teen boys. Historically, teenage girls received lower insurance premiums than boys, reflecting male drivers' higher level of involvement in motor vehicle crashes. But in a 2008 review of data from fatal crashes, researchers found that female involvement in such crashes had increased over time, especially for female drivers age 20 or younger, a figure that partially reflects a large increase in the number of female drivers. Improper maneuvering and speeding were the leading causes of fatal car crashes by both male and female drivers. Alcohol use and failure to use seatbelts also played a role in fatal crashes by female drivers, although less so than did speeding and improper maneuvering. For details on this research, visit PMID 18760108.

In a 2010 NICHD-funded study, the same investigators identified gender differences in alcohol consumption as the most important factor in explaining male-female differences in non-fatal crashes. The researchers applied a hierarchical model—meaning that decisions at higher levels affected the decisions (and skills) at lower levels—to non-fatal crash data from the National Highway Traffic Safety Administration's General Estimates System (GES) for 1997 to 2007. The analysis revealed that females were less involved in non-fatal alcohol-related and speeding-related motor vehicle crashes than were males. There were no gender differences in crash rates relative to fatigue or improper maneuvering. Visit PMID 20728655 for more information on this finding.

More recently, the same group of researchers, this time funded by the National Institute on Alcohol Abuse and Alcoholism, analyzed alcohol consumption and gender as factors in car crashes. The team compared data from the U.S. Fatality Analysis Reporting System with data from U.S. National Roadside Survey and found that, for both males and females, the amount of alcohol consumed increased the likelihood of a fatal car crash. For most segments of men and women, the crash risk associated with alcohol has remained stable over time, but young females are more likely to be in alcohol-related car crashes now than they were in 1996. The analysis also showed that sober male and female young drivers were also more likely to be in fatal car crashes now than they were in 1996, an increase which the researchers believe stems from texting and other distractions. To learn more about this finding, visit PMID 22456239.

Graduated licensing programs—in which privileges are granted to new drivers in phases—are in effect in various forms in all 50 states and the District of Columbia. Researchers funded through the NICHD's Demographic and Behavioral Sciences Branch sought to evaluate the effectiveness of these graduated programs in reducing fatal crashes among teen drivers. Based on analysis of the National Highway Traffic Safety Administration's database, the researchers found that fatal crashes among 16- and 17-year-olds were reduced by 8% to 14% when these licensing limits were in effect. The greatest benefit came from restrictions on nighttime driving and on the number of teenage passengers.

The researchers also found that graduated licensing laws were particularly effective at reducing alcohol-related fatalities among teens. They also found that these programs work even better when combined with other restrictions, such as mandatory seat belt laws. For details on these findings, visit PMID 21972851, PMID 22017831, PMID 22105383, or http://www.nichd.nih.gov/news/releases/Pages/110411-graduated-licensing.aspx.

NICHD research has built a considerable base of evidence supporting provisions of the national Checkpoints program—a driver education program that encourages parents to supervise their newly licensed teens and to model good driving behavior.

One important feature of the Checkpoints program, which was created by DESPR researchers, is a written agreement signed by both parents and teens. In this agreement, parents and teens commit to the conditions under which the new driver will develop good driving judgment. Learning to drive is a process of developing good judgment behind the wheel; the first six months after new drivers receive their licenses are considered the most dangerous. With a driving agreement, the parent-teen pair establishes a "checkpoint" in one month, after which they asses the new driver's comfort driving on local roads in different situations, such as when there is daylight, the roads are dry, and there are no passengers in the car. At each checkpoint, they agree to remove restrictions as long as the teen demonstrates good driving judgment. In addition, the parent commits to providing the teen rides as needed until all of the checkpoints are achieved.

Previous studies of the Checkpoints program examined whether participation influenced parental restrictions on novice teenage drivers. In one examination of the program's effectiveness, researchers compared different approaches of 469 parents and their teenage children, who had learner's permits. One-half of the families received newsletters on risky teenage driving behavior, an educational video, and a parent-teenager-driving agreement as part of the Checkpoints program. The other families received standard driving safety information. Parents who received the Checkpoint materials maintained stricter rules for when and under what conditions their teens could drive. A later study confirmed that this trend continued a full year after teens received their licenses. For details on the program, visit PMID 15727975, http://www.nichd.nih.gov/news/releases/Pages/teens_driving.aspx, or PMID 2747635.

Every April, nonprofit and government organizations unite to raise awareness about the risks of driving while distracted. Because of the alarming statistics on accidents related to cell phone or mobile device use, this year's message focuses on stopping cell phone use while driving. According to a 2006 study by researchers at Monash University, a driver is four times more likely to crash while using a hand-held device such as a cell phone. A study by the Federal Motor Carrier Safety Administration on commercial drivers found drivers up to 23 times more likely to crash while texting.

NICHD research on risk factors for crashes and ways to increase overall driving safety help to complement the awareness efforts of the U.S. Department of Transportation and other organizations. By focusing on adolescents, this research is helping to identify effective practices and interventions that keep young drivers, their passengers, and other drivers safe.

For more information on driving behavior and risk research, select one of the links below: