Improving understanding, diagnosis, and treatment of a complex disorder 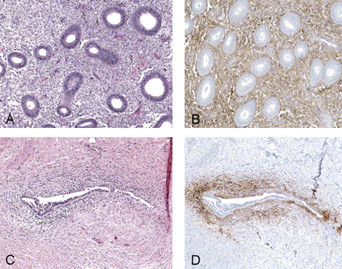 Common symptoms of endometriosis include: pain before, during, or after menstrual periods; pain during or after sex; lower back, abdominal, or pelvic pain; and infertility. Endometriosis is one of the top three conditions associated with female infertility, and about 30 to 40 percent of women with the condition cannot get pregnant on their own. Some women with endometriosis experience frequent and severe pain. Other women, like those in the ENDO study, have no symptoms and only learn they have endometriosis when they have trouble getting pregnant.

Although researchers understand some of the factors associated with endometriosis, such as having a family history of the disorder, having heavy periods, and starting menstruation at a young age, the exact cause is still unknown. Ongoing studies and previous research findings suggest that exposure to environmental chemicals may also play a role in risk for endometriosis.

National Endometriosis Awareness Month, commemorated in March, provides the NICHD with an opportunity to share information about this condition and the Institute's research efforts to understand, treat, and prevent it. Several recent studies, described below, illustrate the Institute's research efforts to improve understanding of and treatments for endometriosis, which could also improve the quality of life for women who have the disorder. Select a link below to learn more:

The body relies on complex systems to control its activities and growth. One important system helps break down and remove tissues that the body no longer needs. In three inter-related studies supported by the NICHD Reproductive Sciences (RS) Branch, researchers showed how an imbalance in this breakdown and removal system is linked to problems with egg cells and embryo development in endometriosis.

These results provide strong evidence for TIMP1 as one factor that can help explain the increased prevalence of infertility among women with endometriosis. By pinpointing the role of the TIMP1 molecule, the researchers have suggested new lines of research for understanding the condition and for developing treatments to prevent its effects on the reproductive system, generally, and on fertility more specifically.

Although researchers know that estrogen plays an important role in promoting endometriosis, the influence of another major hormone, progesterone, has been unclear. The work of researchers involved with the RS Branch-funded Specialized Cooperative Centers Program in Reproduction and Infertility Research is helping to fill this gap.

In one study, the researchers compared the activity of genes in the endometria of women with and without endometriosis. The ovary normally begins to produce large amounts of progesterone after ovulation, signaling the endometrium to prepare for pregnancy. The investigators found that the hormone levels in all women they studied were normal, but that the women with endometriosis had different gene expression. Specifically, several genes that progesterone normally turns off after ovulation remained turned on, and vice versa. Genes that promote cell division and longevity were turned on inappropriately, and genes that protect cells and promote embryo implantation were turned off.

Based on these findings, the researchers suggested that this lowered response to progesterone probably makes it more difficult for a fertilized egg to implant in the womb and grow. This problem may underlie some of the infertility that many women with endometriosis experience. Further study will test these ideas and continue clarifying the role that progesterone plays in this disorder.

Genetic inheritance is a major risk factor in endometriosis, meaning that relatives of those with endometriosis are at an increased risk for developing the disease themselves. Because of this connection, research has focused on both the expression, in which RNA creates proteins and other gene products, and on the regulation of genes connected with the disease.

Recent studies have focused on microRNAs (miRNAs), important regulators of gene expression. These small genetic sequences do not encode proteins or other gene products, but bind to specific RNAs and inhibit protein production. Previous research found 22 miRNAs that may be linked to endometriosis and that are produced at different levels in women with and without the disease.

In recent association studies supported by the RS Branch, investigators explored the relationship between endometriosis risk and subtle changes in the 22 miRNA sequences—called single nucleotide polymorphisms (SNPs). The researchers hypothesized that an inherited SNP or a mutation near a miRNA binding site could contribute to endometriosis.

The findings showed that specific genes, including tumor necrosis factor and cyclin-dependent kinase inhibitor, were major factors in the pathways that contributed to endometriosis. In addition, specific SNPs were more likely to be found in the genes of women who experienced infertility from endometriosis, and in women who had more severe cases of endometriosis.

Further understanding of how these miRNAs are regulated and identifying their target genes may lead to novel therapies for endometriosis. For details on this finding, visit PubMed ID: 20935158.

Researchers are learning more about how the factors and conditions experienced in the womb affect lifelong and adult health, especially related to heart health and disease. A research team that included investigators from the NICHD Division of Epidemiology, Statistics, and Prevention Research (DESPR) was among the first to investigate the exposures during pregnancy that influence the risk of female babies developing endometriosis later in life.

The researchers asked 84 adult women who were undergoing surgery for endometriosis whether their mothers drank alcohol, consumed caffeinated beverages, or smoked cigarettes while pregnant with them. The study found no links between caffeine or alcohol and endometriosis. However, with regard to the cigarette smoking, researchers found an interesting negative association: women who were eventually diagnosed as not having endometriosis were more likely to say that their mothers had smoked while pregnant. In addition, women who currently smoked themselves were also less likely to be diagnosed with endometriosis, compared with non-smokers.

Additional research is needed to understand this association and what mechanism(s) may be involved. Researchers know that smoking cigarettes can alter the growth of blood vessels and block the effects of estrogen. Researchers suspect that either or both of these mechanisms may play a role in these outcomes, rather than the cigarette smoking itself. Although this study was limited in size and scope, it is the first of its kind to examine early-life risks for endometriosis and highlights the need for additional research on these types of risks.

Statins as a Possible Endometriosis Treatment

In studies, supported in part through the RS Branch-funded Specialized Cooperative Centers Program in Reproduction and Infertility Research, researchers investigated whether one type of statin, simvastatin, inhibited endometriosis in a specially designed mouse model. Researchers implanted human endometrial tissue into the mice and treated them with estrogen alone or estrogen with simvastatin. The researchers found that the endometrial tissue implants in the simvastatin group decreased in number and size. As discussed above, MMPs are enzymes that break down tissue, and their activity is regulated by TIMPs. When endometrial tissue attaches to the outside of pelvic organs, MMPs help degrade the tissue that surrounds the endometrial patches. The researchers also found that simvastatin reduced levels of one type of MMP, MMP-3, in endometrial cells, suggesting that this statin may work by inhibiting MMPs.

This study indicated that simvastatin may be effective for reducing endometrial growth. Future studies will continue to investigate statins as a possible treatment for endometriosis.

The pain often associated with endometriosis can have far-reaching effects on daily activities, personal life, and even career. Researchers in Puerto Rico surveyed women with endometriosis to get a clearer picture of how their lives are different because of endometriosis-related pain.

Most of the 108 women who responded to the survey said that their endometriosis pain interfered with daily life in some way. They reported that activities, including chores, sex, sleep, exercise, and social activities, were more difficult. About two-thirds of the women said that the pain also interfered with their jobs, whether by reducing the quality of their work or by keeping them home sick. In fact, all of the women reported missing more than 19 days of work per year, on average, because of endometriosis pain. Many had never heard of endometriosis before their diagnosis, and they typically had to visit many doctors before learning the cause of their pain. Despite the severity of their symptoms, it took an average of nearly 9 years for these women to be diagnosed.

The results of this research point out how wide-ranging the effects of endometriosis pain can be. The pain affects not only to the women who experience it, but also to their families, colleagues, employers, and the overall economy. These findings also highlight the need to encourage health care providers, family members, and friends to learn more about the disorder to help diagnose and treat it more quickly.

Botulinum Toxin as a Possible Treatment for Endometriosis-Associated Pain

Injecting botulinum toxin into a muscle can weaken its activity; therefore it is widely used to treat conditions associated with excessive muscle activity and spasms. Researchers previously found that botulinum toxin reduced pain and spasm when injected into the pelvic muscles of women with pelvic pain, but too few women were studied to positively conclude the effectiveness of the treatment.

Researchers conducted a preliminary test of injecting botulinum toxin in a few women who had chronic pain associated with endometriosis that was not responsive to hormone therapy or surgery. These women reported significantly less pain for up to a year after receiving the injection. Now, an NICHD-supported clinical trial and other studies are under way to examine the effectiveness of botulinum toxin for treating endometriosis-associated pain.

For more information on this clinical trial, visit http://clinicaltrials.gov/ct2/show/NCT01553201.

Treating the pain of endometriosis, preserving fertility, and relieving other effects on women's lives are at the foundation of NICHD research on endometriosis. These NICHD-funded studies, along with ongoing clinical trials on endometriosis, reaffirm the Institute's commitment to answering endometriosis research questions during National Endometriosis Awareness Month and throughout the year.